2400 kilometers, 4807 meters, 5 countries, one month on the road and getting from Romania to the top of Mont Blanc just by the power of our legs, this would be a very short summary of our journey.

If I were to look back at all our summer holidays from the past 6 years, and at all the small adventures in between, the one month bike touring expedition from 2011 stands out from the crowd. On one hand it was really long compared to other trips, on the other hand it was a completely new experience for us as it was the first long bike tour. And as usual, when you try out something new and when you discover new things the experience has a completely different intensity.

I can remember when the idea first popped into our minds, almost 2 years before we actually set out to do it, while we were in our car heading to the mountains. The day before I had read an article about Goran Kropp, the crazy swede who rode his bike from Sweden to Everest, and then proceeded to climb the mountain. And as I was telling my wife about the article, the idea sprung into our heads, that we might try something similar, even though on a smaller scale.

It took almost two years in order to realize we actually want to try it, and probably the deciding factor was that we started to do more and more bike tours, and we started to read journals and blogs written by people who were traveling around the world. So we decided to go for it, and to try it for a month, without the risk of leaving our jobs and the normal security. And at the same time we tried to combine our other passion, mountaineering.

In a world in which traveling is usually reduced to taking the car, or the airplane and ending up a couple of hours later on the other side of the continent, or on the other side of the world, travelling by bike does have a certain beauty. And there also is the feeling which you have each morning when you start on your bike, with all what you need packed in the panniers, with a day ahead of you and with the freedom to take any road you choose. And at the same there is also the mountain at the end of the journey, in the first days impossibly far away but closer and closer we advanced in our journey. 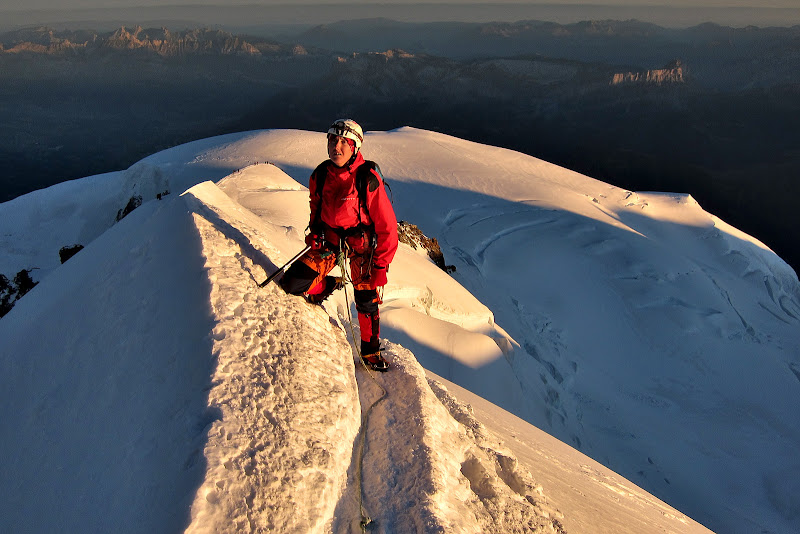 Gasping for air near the top of Mont Blanc.

I already wrote about our trip in detail, one short post for each day, because without these the memories and the days would have mixed one with the other. These are maybe a bit to technical and long, so a I’ve tried write a quick subjective summary. We started  with the flat Hungarian plains, called “Puszta” and even though we were afraid of the high temperatures which are normally encountered here in summer, we rode under a cloudy sky with temperatures which reminded us of autumn, rather than July. The places, the villages and the language are still familiar, at least to me as I grew up relatively close to the Hungarian border

Skipping a bit further ahead, we reach Slovenia, a country of which we knew almost nothing about before crossing it’s border, somewhere between two forgotten villages with similar names. It’s easy to see how many of the borders in Europe were drawn, sometimes in a relatively arbitrary manner following some faint geographical landmark. This was more than obvious when one villager from Hungary guided us on a country road towards the neighboring village and to his cousin, which both were in Slovenia.

A few days later and we meet the Drava river, which collects a lot of the smaller rivers which flow eastwards from the Alps, before meeting up with the Danube. As may of the surrounding mountains are limestone mountains the river has at times an eerie blueish color. It was also followed by a long bike path, which we followed from Maribor for almost 400 kilometers into Italy, into which we crossed north of the Dolomites. 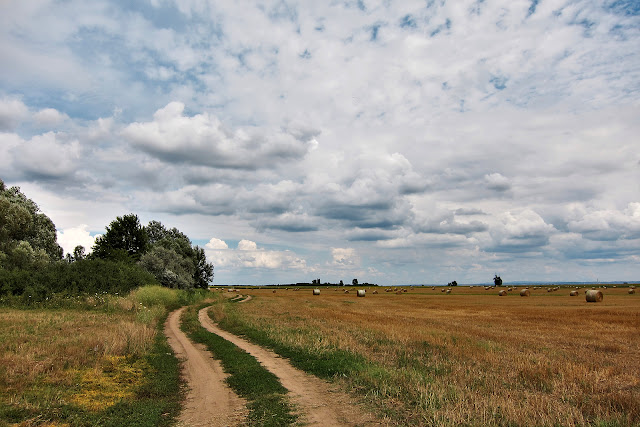 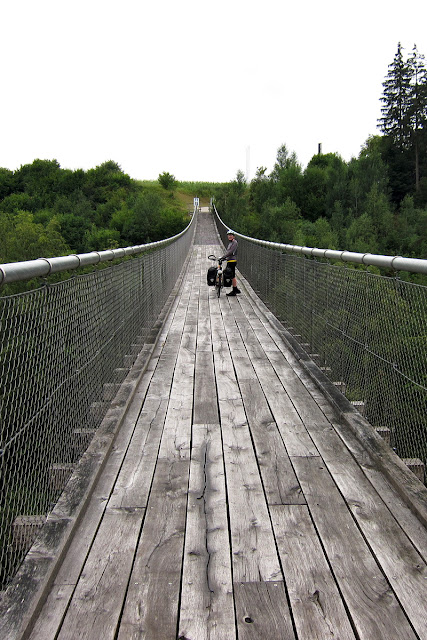 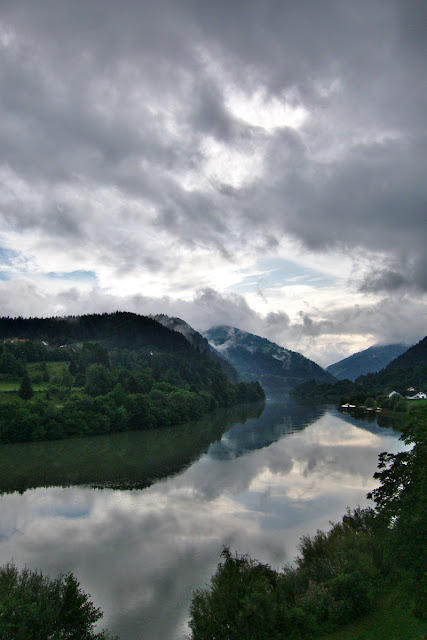 Riding along the Drava river. 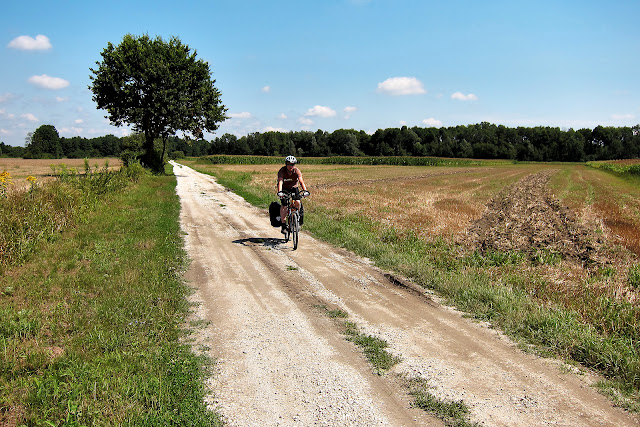 Border crossing between Hungary and Slovenia, in the middle of nowhere.

From Maribor onwards we feel in our element, as we’re watched on both sides of the valley by high mountains, and we find the cold and fresh mountain air we know from Romania. Austria is the same charming country we discovered a couple of years ago, when we decided to try to learn german. We make minimal use of our german though, as the signs are so clear and the bike paths well designed, so we rarely interact with the locals.After crossing into Italy we start the long descent towards the Italian plains, following the Adige river through the Dolomites. And if it were not for the hurricane which blows from south, we could actually do enjoy it.

The southern wind brings at the same time the salty smell of the sea, which isn’t that far away at this point, but we are still in the middle of the mountains, so the combination seems a bit weird. In Italy we find a contrast between small villages which seem older than time, and densely populated suburbias which blend with each other. All in all, we find way to much traffic for our taste, so we try to stay close to the mountains in hopes of avoiding it. Sometimes we aren’t so successful at doing that, and near Bergamo we end on an express road which leads to a long badly lit tunnel, which is also full of trucks. But there is no turning back, so we experience a moment which seems taken from Dante’s Inferno. 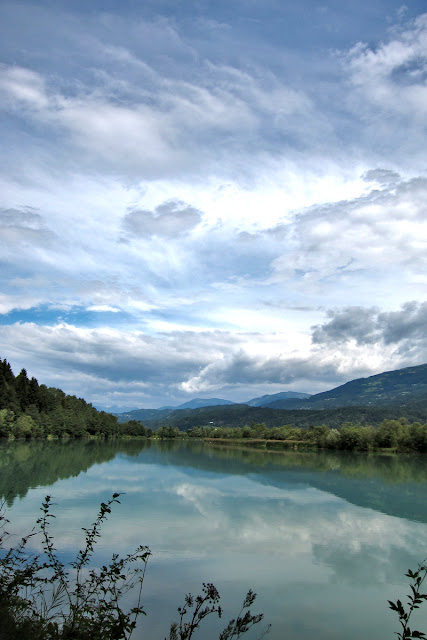 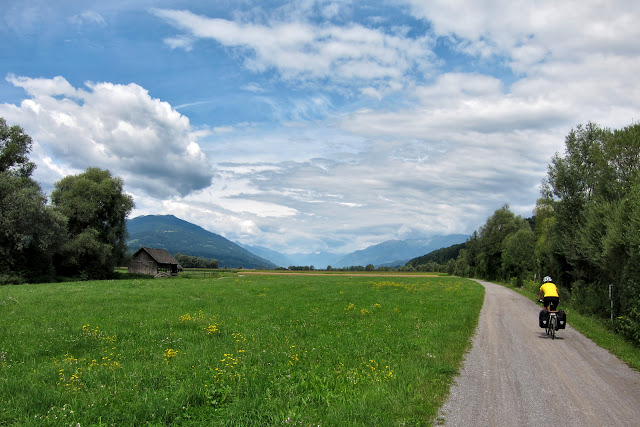 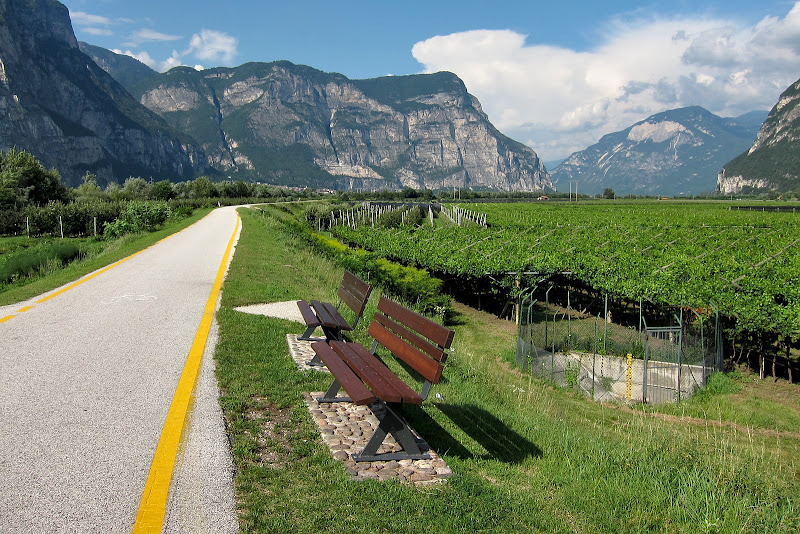 Riding along the Adige river. 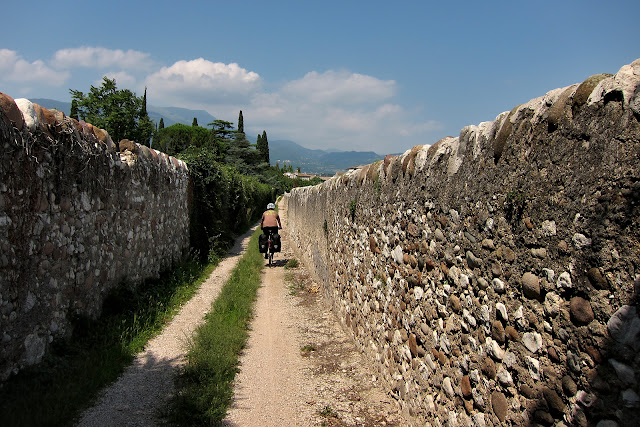 Skipping a bit further in time, after a couple of days in which Mont Blanc drew us as a magnet, and after a steep climb from Courmayeur, we reach the camping at the base of the mountain, after 15 days and 18000 kilmeters through Europe. The moment seems a bit surreal, that after so many days we only have a couple of meters left.

We’re glad to have made it, but now the second part of the journey begins, climbing the actual mountain. But first of all we have to go through a metamorphosis, to go from bikers to climbers, and in order to do that we need our climbing gear which arrives just in time through the Italian postal service.

The following night, we find ourselves in the front of a chain of mountaineers, climbing with headlights through a still night towards Mont Blanc. Everything is light by a full moon, and it’s almost enough natural light to forget that’s actually 2 o’clock in the middle of the night. The crampons bite from the frozen snow, and even though we had no acclimatization we make quick progress on the mountain.

It’s the only chance that we have, as the weather worsens tomorrow, but we feel lucky to have such a weather today. The sunrise catches us near Vallot, were we meet the normal french route. Overwhelmed by the number of climbers on this route, we kind of wish to have chosen another unknown 4000 meter peak as the end point of our journey, where we could have the mountain all to ourselves.

In the last 200 meters before the top we feel the exhaustion and the lack of sleep from the previous night, but after a final effort we finally reach the small plateau from the top of Mont Blanc. We started out 17 days ago, from Romania, and we got here just by using our own muscles as power, and we enjoy our short moment on the summit, before starting down the mountain. An extremely long and tiring descent starts, amplified by the dehydration we experience while descending on the glacier. 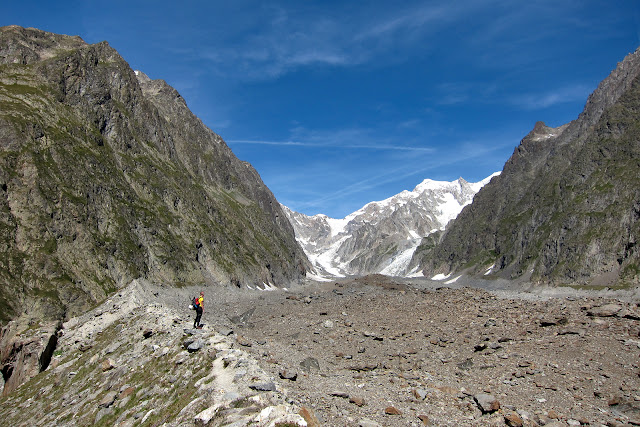 The long glacier which leads to Gonella. 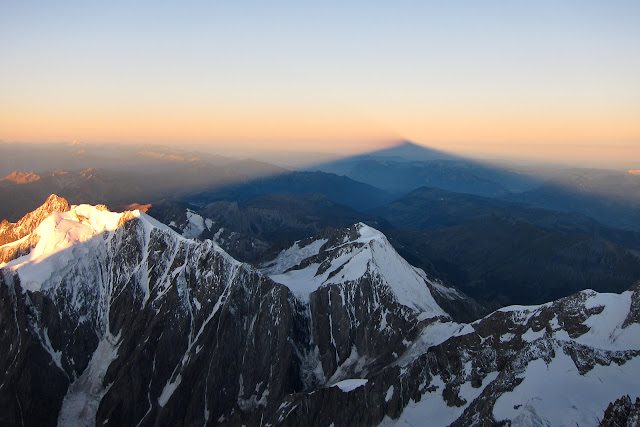 The shadow of the giant. 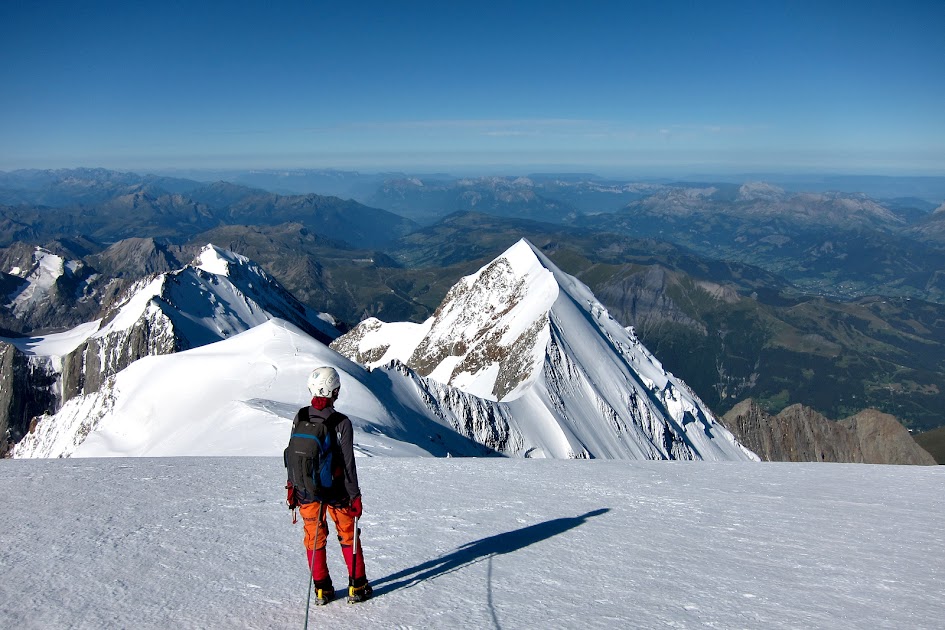 Descending on the same route, this time in daylight. 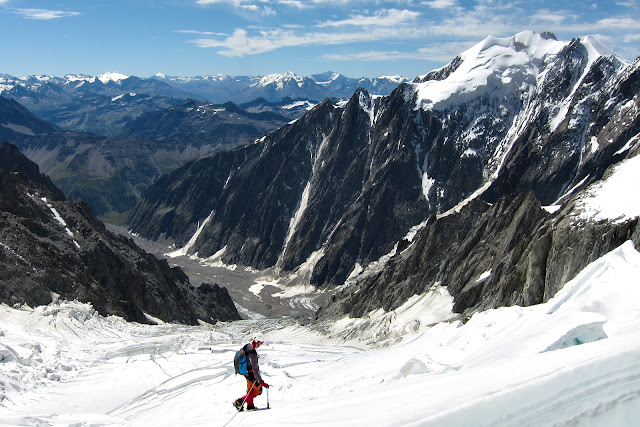 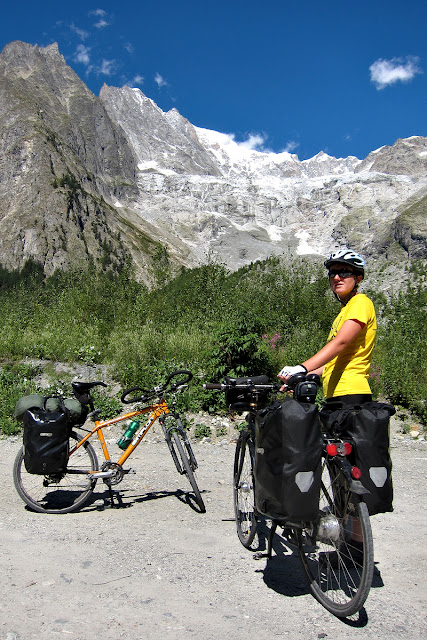 The glacier below Gonella seems endless, and the we feel so tired that we could fall asleep on each rock on which we take a break. Less than 24 hours ago we started from the camping, and now we’re in a hurry to get to the camping in order to have time to send the climbing equipment back to Romania.

Fast forwarding a bit, and here we are riding on the Inn valley back in Austria, towards the Danube. We didn’t have enough time to get back to Romania on bikes, so we took the train through northern Italy, and from the Brenner Pass we ride as far as we can towards Vienna. We ride our bikes for the first time through Germany, a country in which we got to know really well in the following year. It’s almost the end of summer and of the holiday season, and through all the villages we meet young people and small children which head to the countryside lakes, trying to take advantage of the last hot summer days.

A couple of days later, and we’re riding through Budapest, going from one train station to the other with hopes of catching a train which should takes us closer to the Romanian borders. It’s already the 4th train we exchange today, and we need to catch at least another one. We ride the last 20 kilometers back to Romania, in the middle of the night towards my grandparent’s house in Oradea. 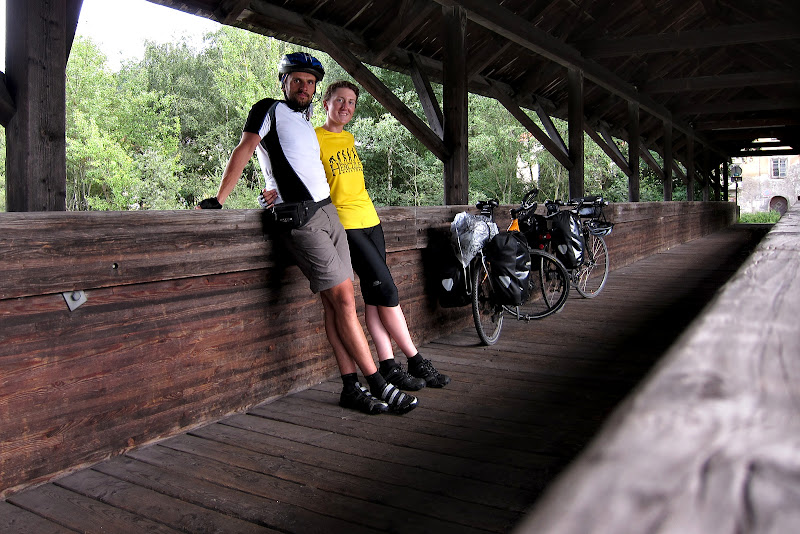 The team and the bikes. 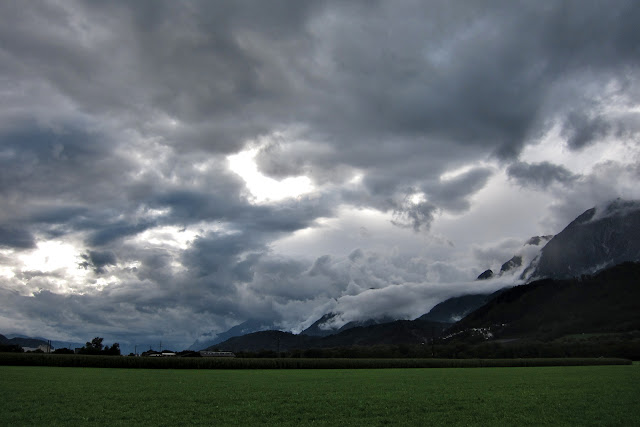 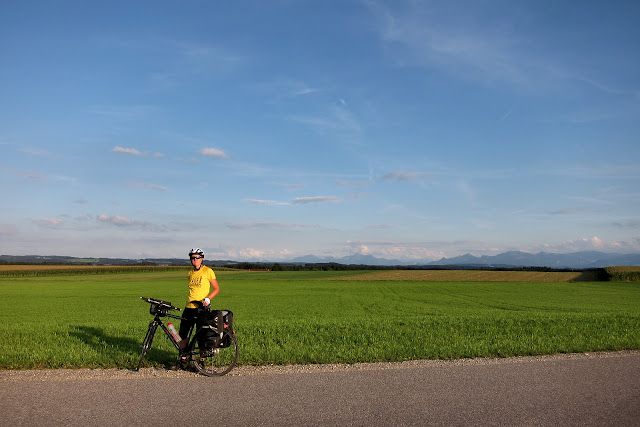 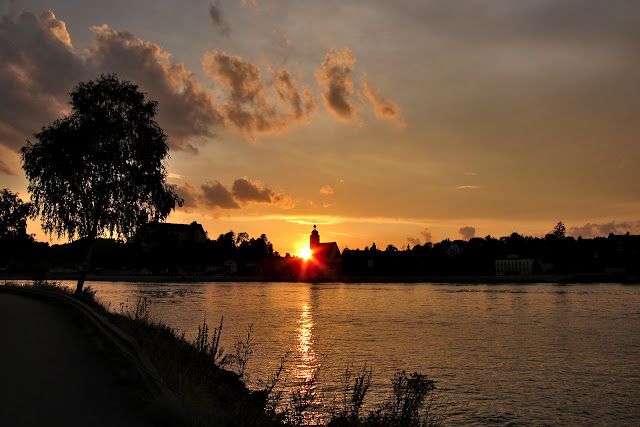 The last sunset of our trip.

As an ending to the short story, I could add that we really enjoyed our small expedition, first of all because it was completely different from our other holidays, usually spend somewhere in the Alps, both requiring long endless hours in the car in order to get there. We still see bike touring as one of the purest forms of traveling, which isn’t very different compared with how people have been traveling up until the 20th century.

There are also downsides, the most important one being that you need time in order to travel like this.But on the other hand there is also the feeling of independence and freedom which you have at the start of each day, the beauty of having everything that you need, and the freedom to explore whatever direction you desire.