It seems that besides the main cities almost no-one lives here. In comparison with Romania the villages are much smaller but further apart and just as in Romania partly deserted. And if you add the relatively cold weather I’ve add during the last week of February, and that the villagers where probably all inside their homes trying to keep warm it was relatively hard even to find someone to ask for directions.

The network of secondary roads is wonderful though, and I must return here for shorter trips during the late spring or during the early summer. During my crossing of Bulgaria the plan was to use the main roads as little as possible, and after 600 kilometers I can say that even though some bits where a bit longer and tougher the experience was clearly better. If I have enough time I always prefer a longer detour through rural areas to the busy main roads.

he other thing about Bulgaria is that it’s quite hilly, and during an 80 km day of cycling it wasn’t uncommon to gather around 1000 meters of ascent and descent. What I didn’t like about Bulgaria was the lack of human contact. In some places it was hart to find people but even if I found them the language was sometimes a barrier which I couldn’t overcome. I know few words in Russian but it seems that their Bulgarian equivalent is spelled sometimes quite differently and the few words which are the same in Romanian and in Bulgarian weren’t enough to really communicate with the locals. English was really rare and I was a bit surprised that I was able to even use German once. It was at the same time a really useful exercise in reading the Cyrillic script with all the signposts scattered around.

As highlights of the crossing I passed 3 UNESCO world heritage sites, the rock churches of Ivanovo, the Madara rider near Shumen and Nesebar, the island-town on the coast of the Black Sea. But besides these I have to say that I also enjoyed the rural countryside, with a mixture of old abandoned houses, sheep and cattle grazing on the outskirts of the villages and the remnants of abandoned communist buildings. And it all blended together the brown-grey colors of a sunless week with a weather which reminded me that even with all the climate change which is going on February is still February.

While I enjoyed the feeling of solitude which I experienced during this crossing maybe it was an too direct introduction to the journey ahead. 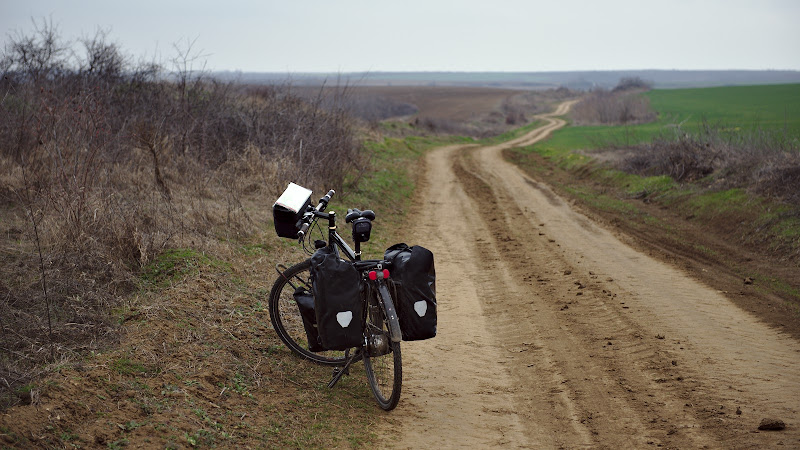 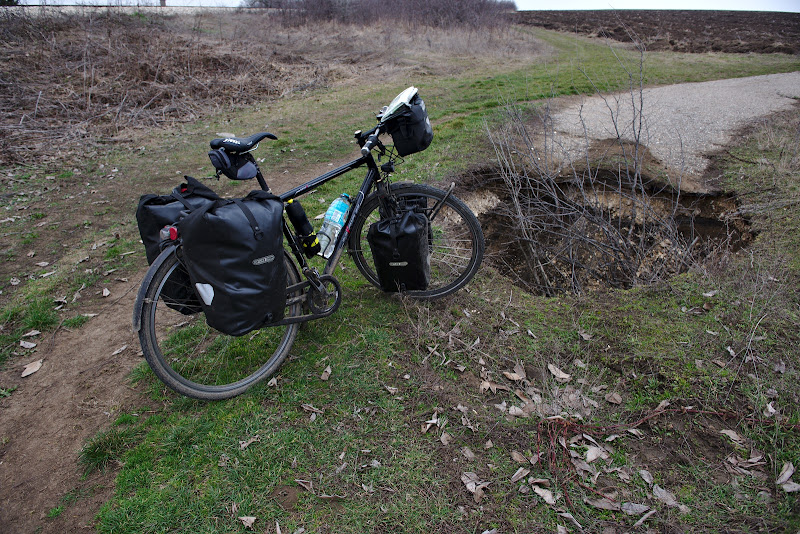 Take care, potholes which could swallow a car. 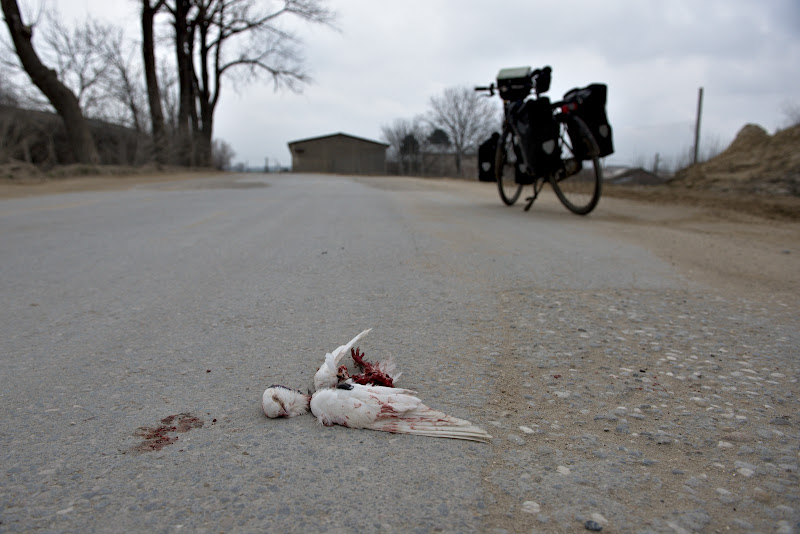 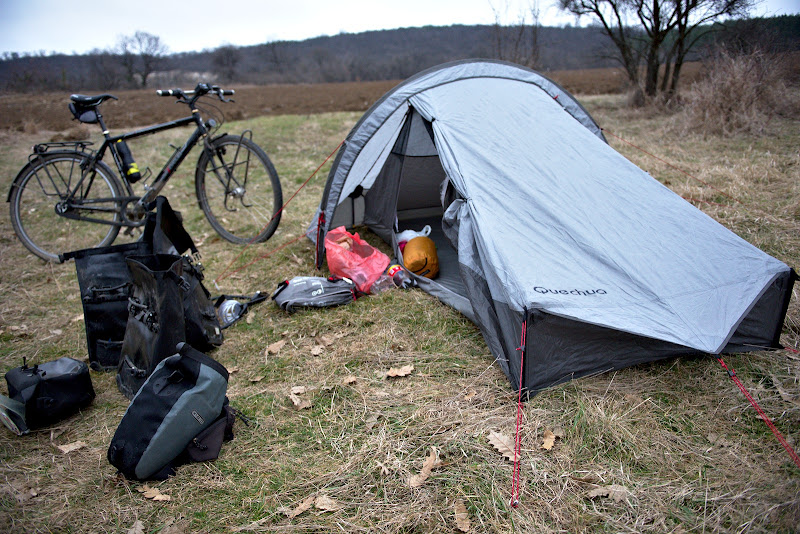 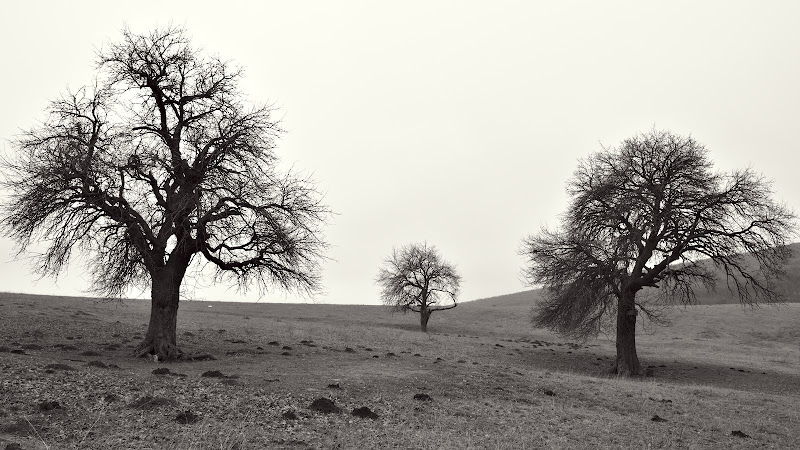 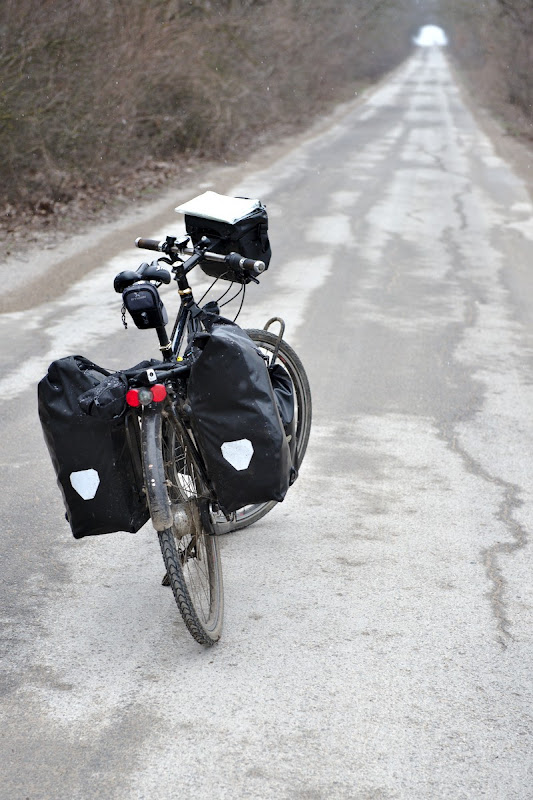 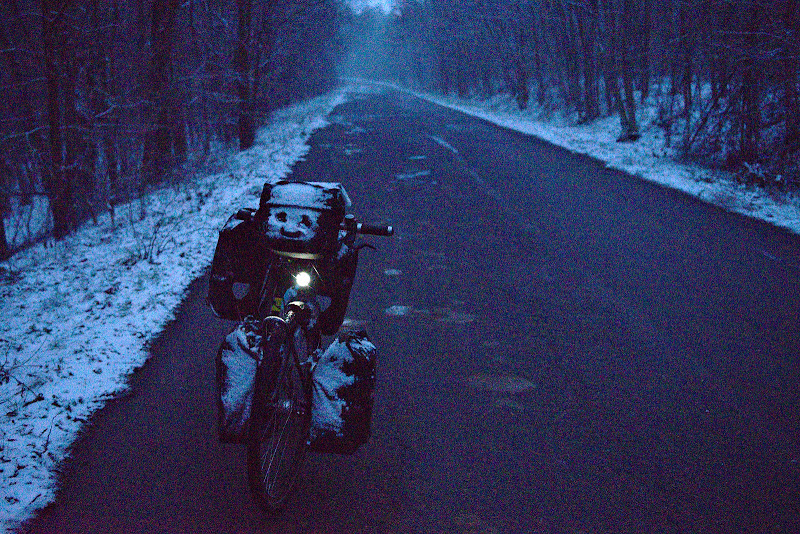 Riding through the storm towards Shumen. 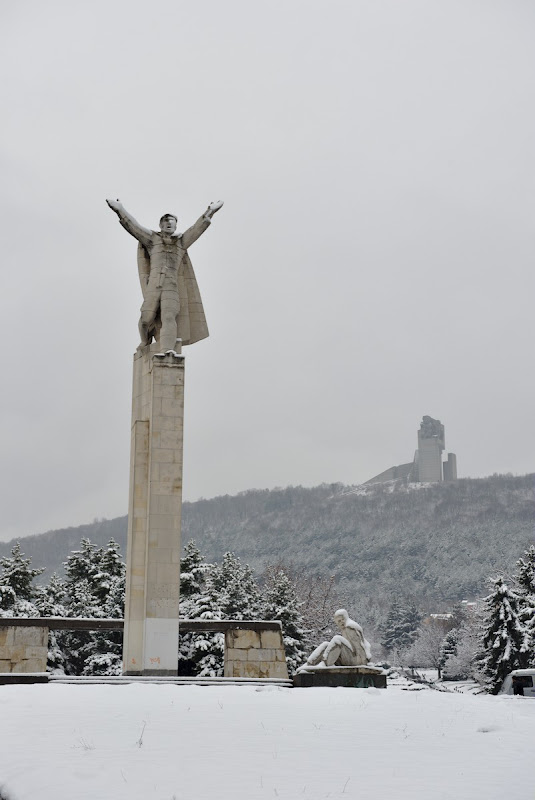 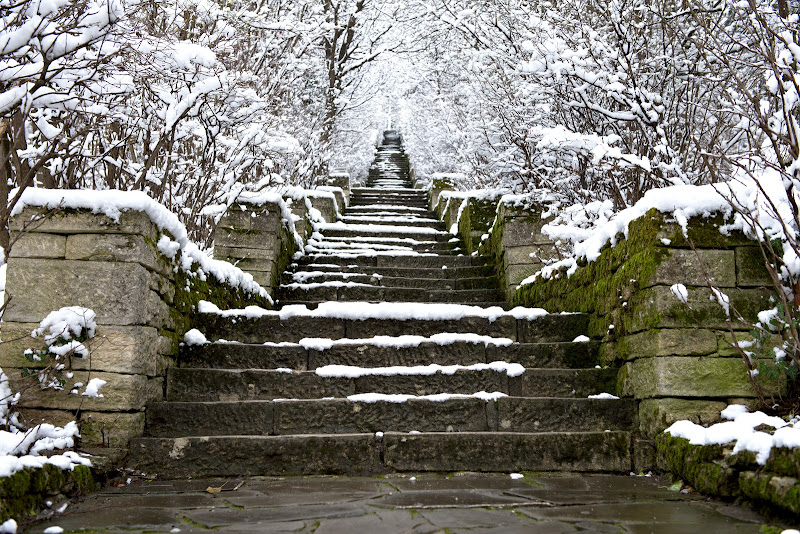 The stairs which lead to the Madara rider. 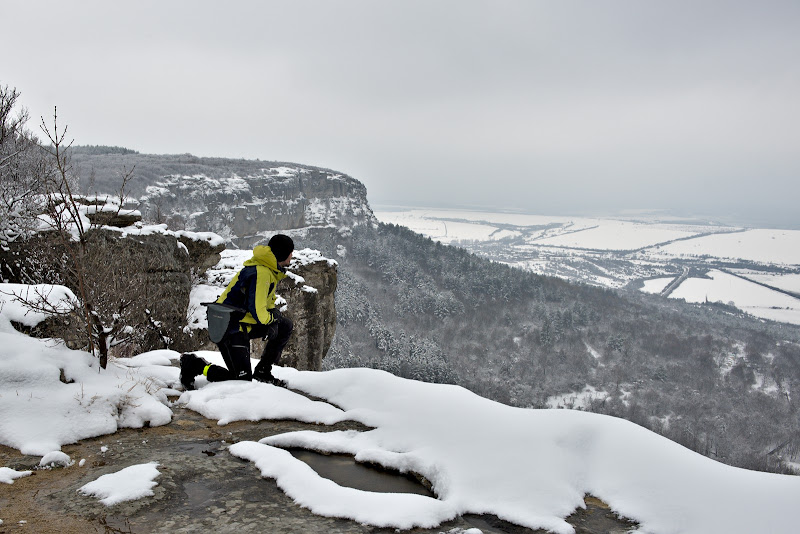 Standing on the place where the fortress once stood. 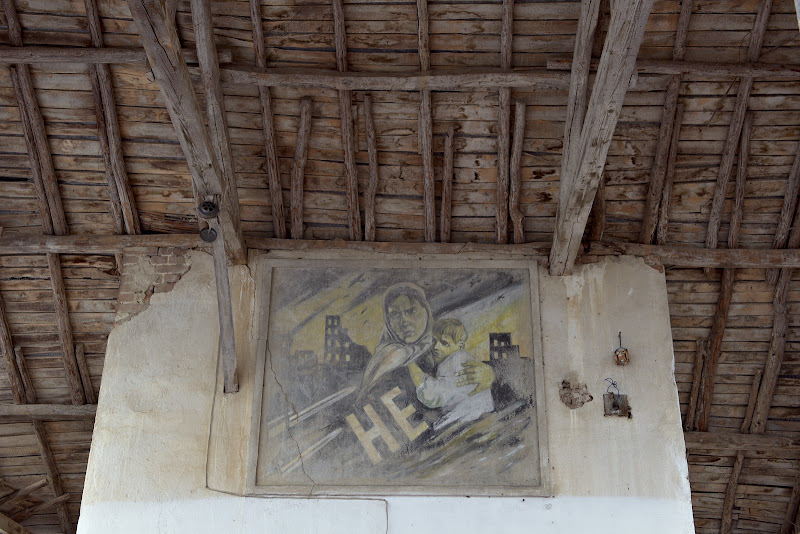 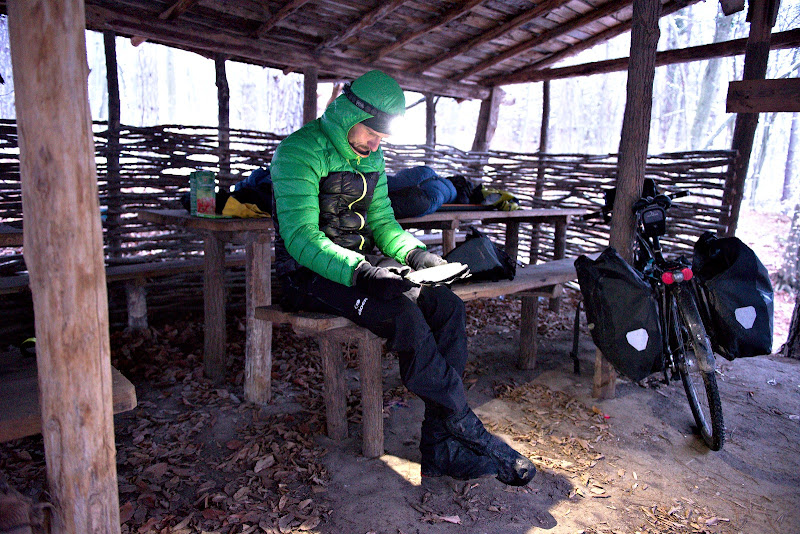 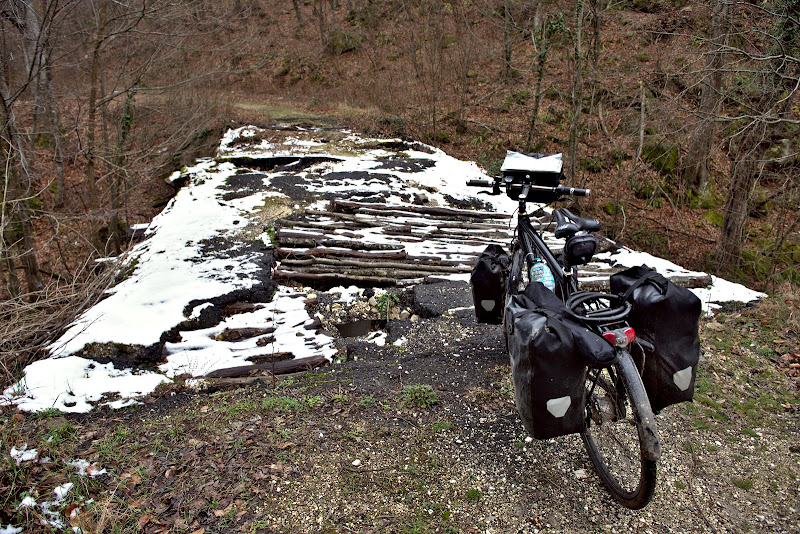 You don’t have to go to BAM for such roads. The first visa for the journey and a short plan for getting all the other visas. Taking out the skis on the first winter days, Baiului mountains

The first ski tour of a rather short skiing season for me, searching for the powder in the Baiului mountains.