As I ride through the green wheat fields around Fand I can hear the familiar sound of crickets typical of a summer night. Soon I enter the village itself and I stroll through the mud bricked house in search of my host for tonight, Hashem and somehow I find it hard to believe that less than one week ago I was cycling in subfreezing temperatures in the Iranian plateau near Miyaneh. Looking only at today the first part of the morning which I’ve spent in the traffic of Teheran trying to find my way eastwards through the network of expressways which runs through the city. Probably if I were to sum up my experience in Iran in couple of words it would be exactly like this day has been, great people but a lot of traffic.

After a quick search and a phone call I’m able to finally find Hashem’s house and what follows is an evening filled with the incredible hospitality the Iranian people are known for. Dinner with the family and with the neighboring relatives, with traditional dishes and with the crusty rice which I haven’t encountered before or after Iran, and most of all with genuine curiosity about how life is in other countries and in other parts of the world.

Before travelling through Iran I read stories about the Iranian hospitality and after almost a month of travelling through Iran I can only confirm it. The Iranians are also over polite between themselves, and it’s customary to refuse something 3 times just to be sure that an offer is genuine, but somehow when foreigners are involved this is combined with a genuine curiosity and with trying to somehow mend the bad image Iran has at a personal level. I have been asked countless times by locals what I think about Iran and about Iranians after travelling through the country and just as many times I’ve answered that I think that the Iranians are more or less incredible. There have been countless situations when complete strangers spent time and/or money to help with whatever problems I was facing. This of course doesn’t mean that everything is rose and perfect but the percentage of people doing seems to be way higher than in other countries. 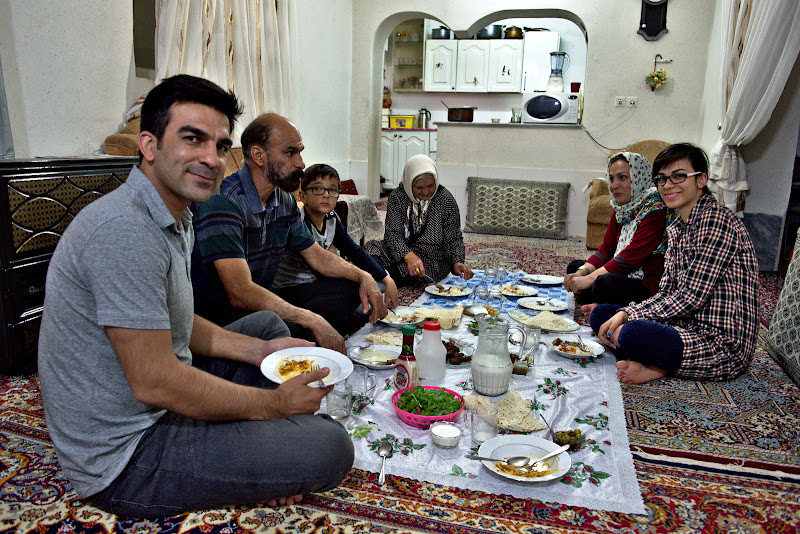 Having dinner with Hashem and his family

On the down side considering my route of crossing Iran from west to east through relatively populated and industrialized areas I can’t really say that I’ve actually enjoyed the actual cycling. The main problem is that for my taste there is an immense amount of traffic in Iran. Gasoline is cheap (something like 0.2 dollars) and it seems that almost everyone has a car. And the cars aren’t necessarily the ones you would expect to see passing you, from 40 year old Paykans and Peugeot 405 which is apparently still produced over there to huge and incredibly loud and inefficient trucks. Either way I can say that in 2200 kilometers there have been really few moments when I was riding without a car in site. Perhaps in the southern part of the country things are a bit different but both the route along the Caspian sea and the actual silk road route suffer from pretty bad traffic.

Regarding traffic on the other hand I can say that after getting used to it traffic through Teheran did seem a bit less dangerous than in Istanbul. I’ve spent a couple of days in both cities sorting out visa issues and I used the bicycle in the process so I can compare them a bit. Even though in Teheran there seem to be countless scooters humming away and the traffic rules seem to be non-existant everything seems to be happening at a slower speed than in Istanbul and you don’t have cars passing very close you you at 70-80 kilometers per hour.

Temperature wise in April in really changed a lot and there was a cold spell which brought temperatures way bellow freezing in the area around Tabriz only to encounter summer like temperatures in the the desert after Teheran. On the other hand I would wouldn’t chose another time do cross it as I’m not a big fan of the 40 degree temperatures which define the summer in Iran.

And now for some more practical informations

Probably the easiest place to obtain the Iranian Visa is Trabzon in Turkey, but for more information the caravanistan section is also very helpful. From Iran I picked up visas for Uzbekistan and for Turkmenistan (in that order). The Uzbek visa took 1 day with a letter of invitation and for the Turkem visa I applied for it in Teheran and I picked it up one week later in Mashad.

Iran can be a confusing country and the subject of money is no exception. The first thing you become when you enter Iran is a millionaire as in 2014 the exchange rate was around one dollar to 30000 Rial. The best place to exchange money I think is at exchange booths at bazars, banks will exchange at the official rate which is considerably lower. But then when you start spending it you discover that almost everthing is handled in tumens, 1 tumen beeing equal to 10 Rial. It takes a bit to get used to it especially when you add in consideration the fact that all the prices are written using Arabic characters.

When comming from Turkey Iran is a pretty cheap country and when you get over the fact that paper notes just keep flying away (keep in mind that they still have a 500 Rial note which is worth around 0.016 dollars) and when you consider that you do get invited a lot Iran has been quite cheap to travel through. Food seemed to be almost half of what it was in Turkey, with restaurand meals starting at 2-3 dollars and alternatively buying food for one day from a shop for a bit more than that. On the other hand there isn’t much diversity regarding things you buy in small shops. A night in a cheap guesthouse / hotel was a bit less than 10 dollars.

As I’ve said before the people are incredibly warm, curios and welcoming and they would be the main reason why I would visit this country once again. Just as an example, after being stopped by the police for a checkup after leaving Hashem’s house he came to the police station with me and tried to help as a translator, spending quite a bit of time in the process. Somehow the Iranians didn’t seem to be as conservative as the Turkish people (at least in the eastern part of Turkey), and even though religion is important there is quite a bit of difference between the laws and what the people think about them.

Yes there is internet, yes all social media is officially banned but everyone still has access to them using vpn’s. While in Iran I bough a cheapish sim card for my phone from Hamrah-e-Avvall, after trying an Irancell sim card which didn’t work and which seemed to be restricted for phones manufactured for Iran. I haven’t tried internet cafes but when I had access to an internet connection is was generally pretty slow.

Iran’s culture and history is amazing and my only regret is that I didn’t have enough time to take a detour in the southern and central part of the country. But from the places which I did see one there were a couple of places and moments which became stuck in my mind. Riding my bicycle through the narrow alleyways of the Tabriz bazar after all the shops were closed was one of them, and the entire place seemed to be taken from the tales of the “One thousand and one nights”. The huge dome of Soltanyeh on a crisp spring day was another one, together with the old caravan-sarais from the barren desert east of Teheran.

And now in short, 2200 kilometers in photos. 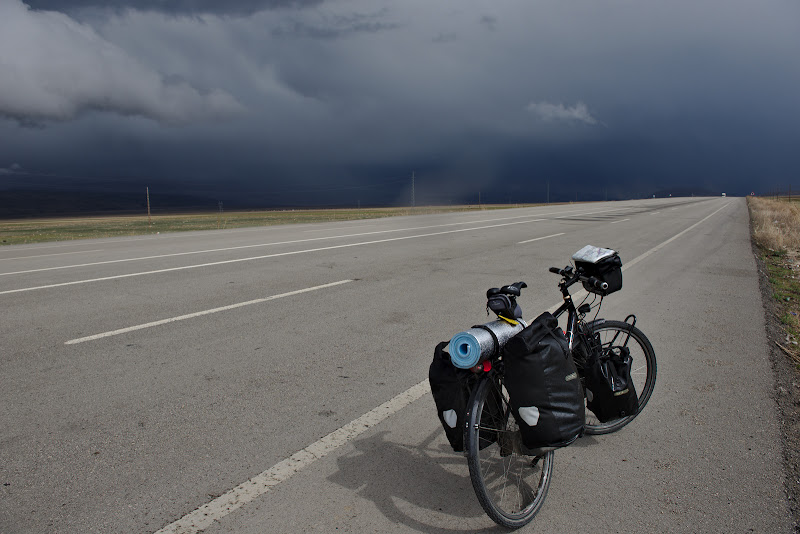 Heading towards the stormy border of Iran. 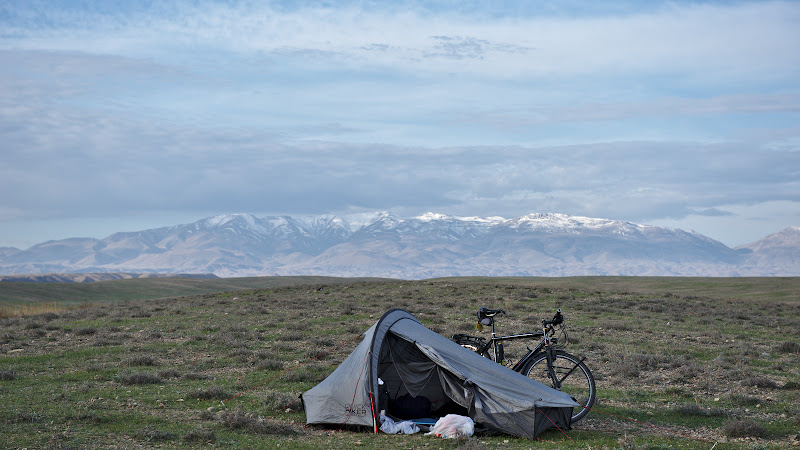 The first morning in Iran. 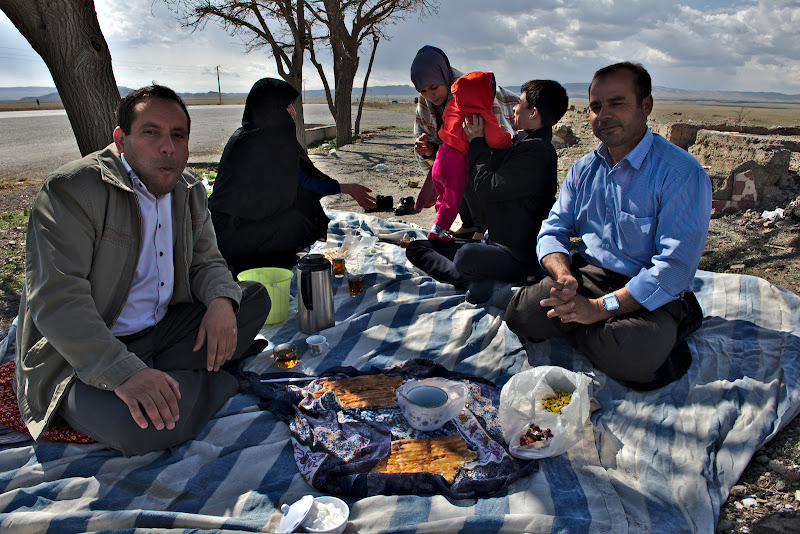 Morning invitation for breakfast, during the Nowruz. 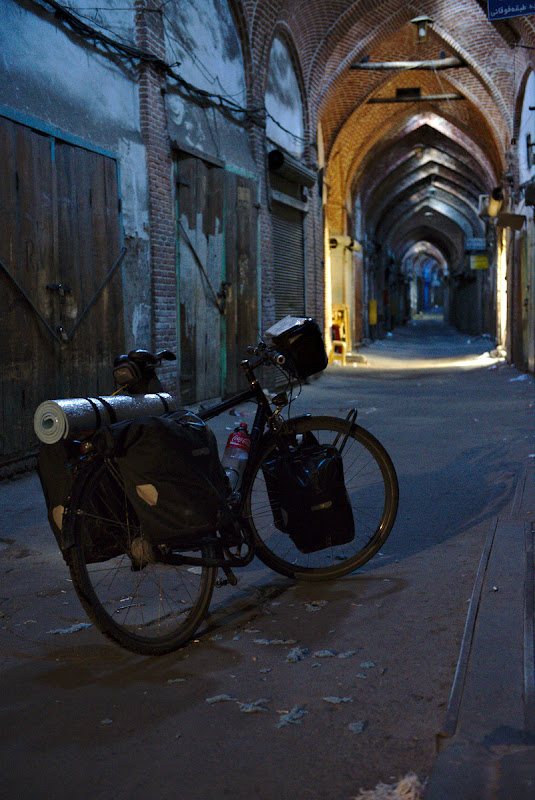 Pedaling on the bazar alleways 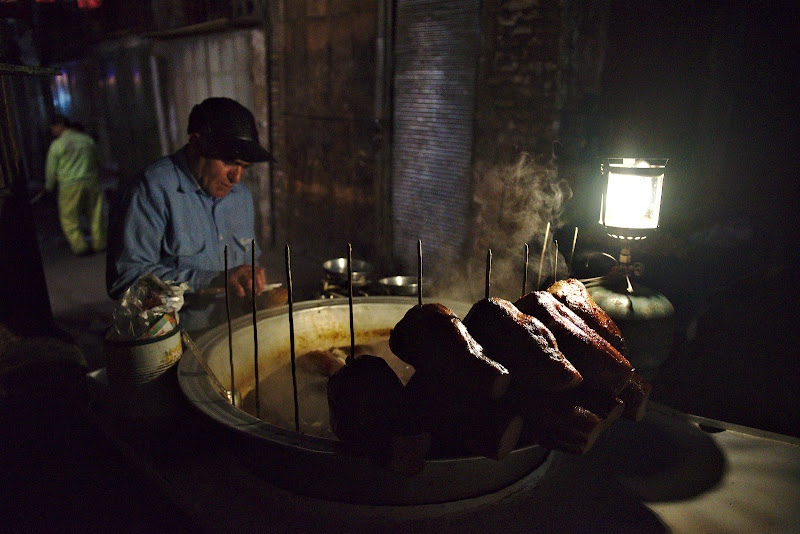 I think it was boiled sugar beat, a sweet treat popular in the Azerbajdjan Province. 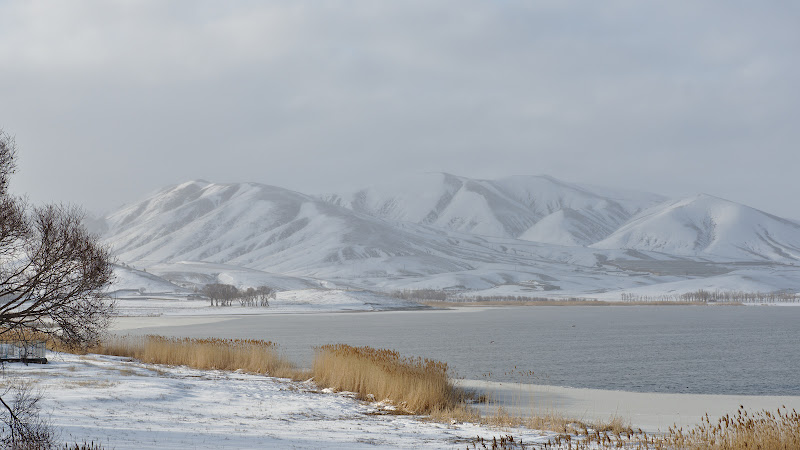 Winter on the iranian plateau 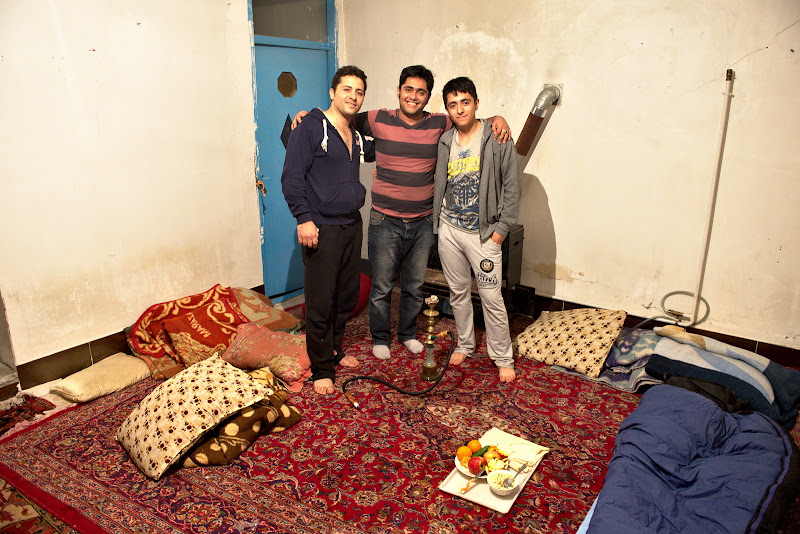 Improvised dinner in the spare room above a car-was 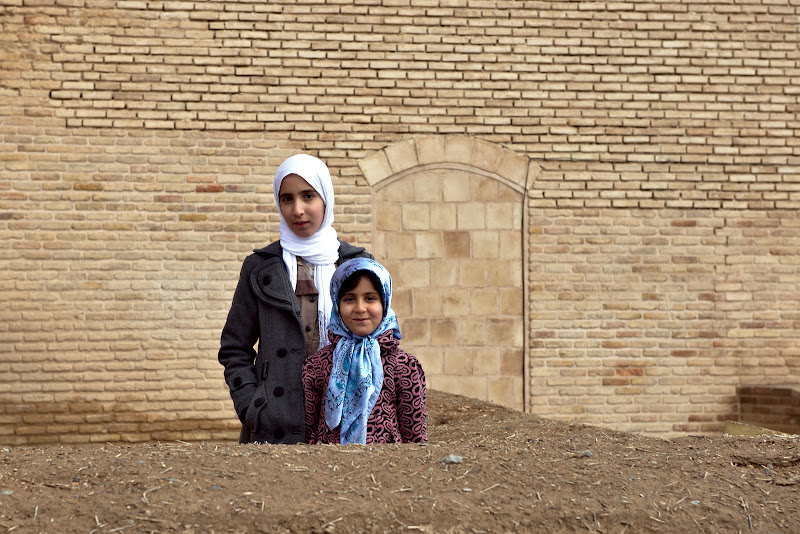 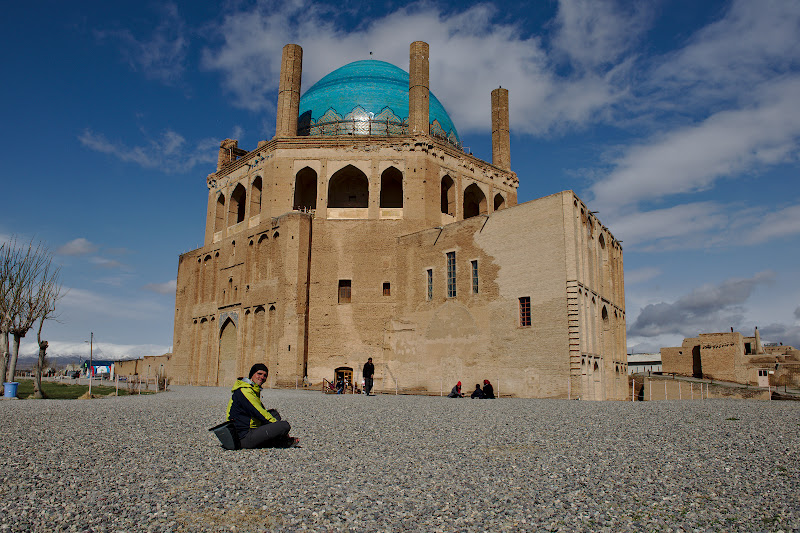 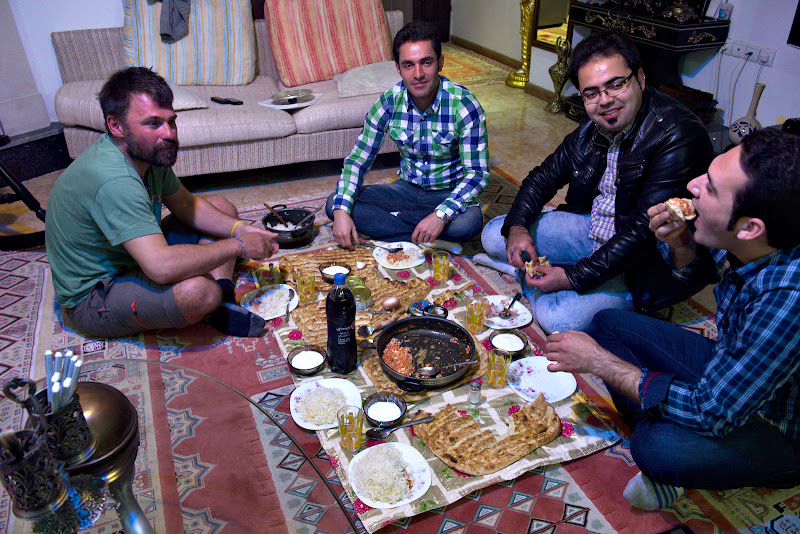 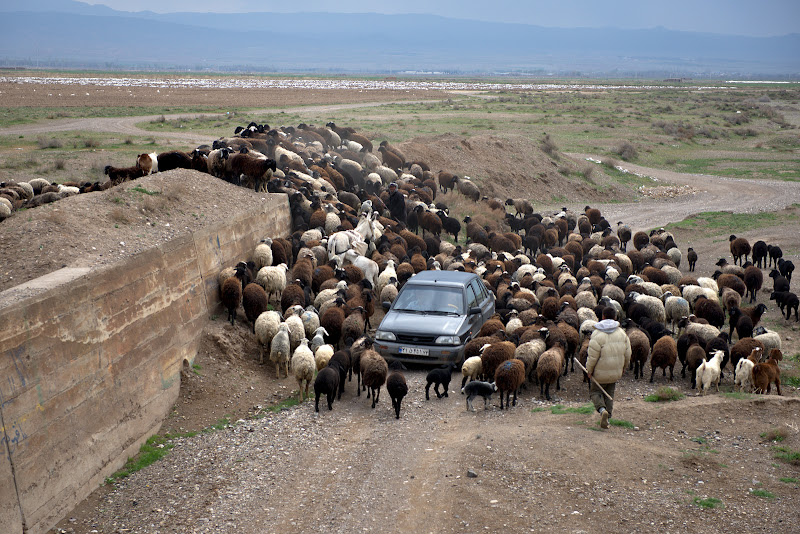 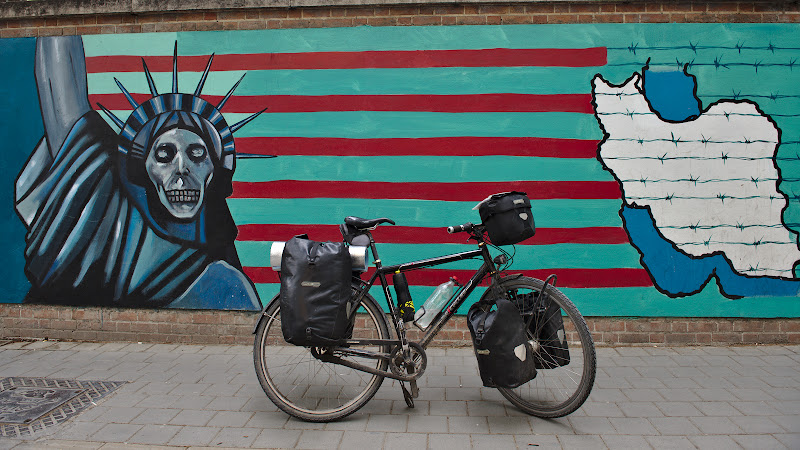 Down with the USA! 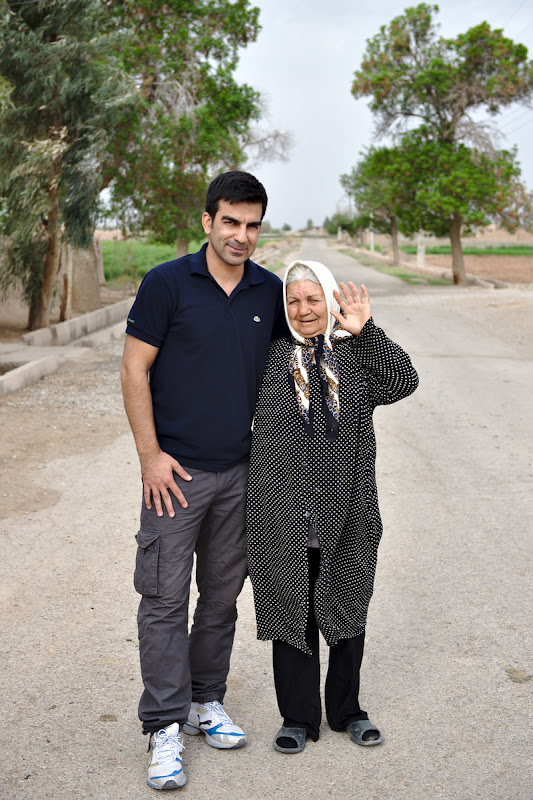 Hashem and his mother. 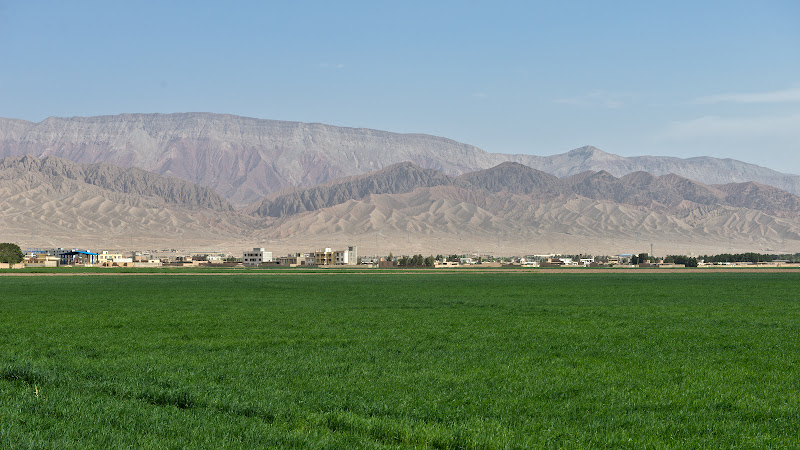 Endless wheat fields in the middle of the desert. 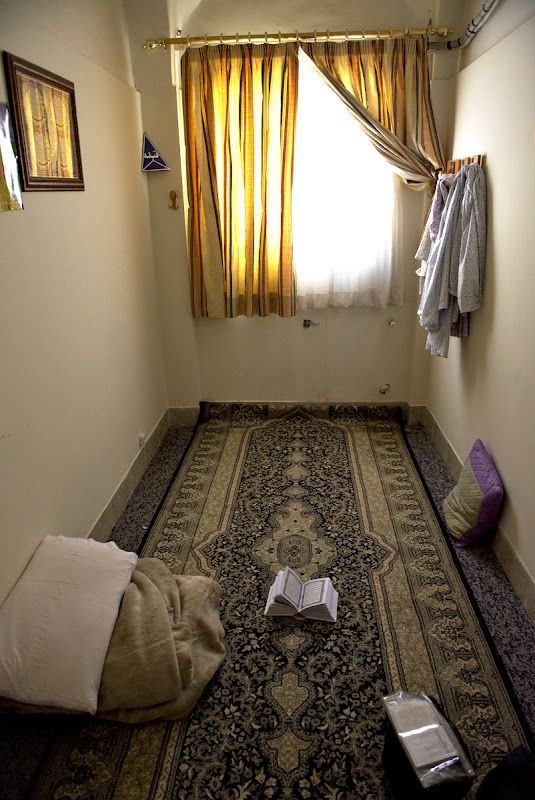 One of the emergency (somewhat religious) rooms from a hotel. 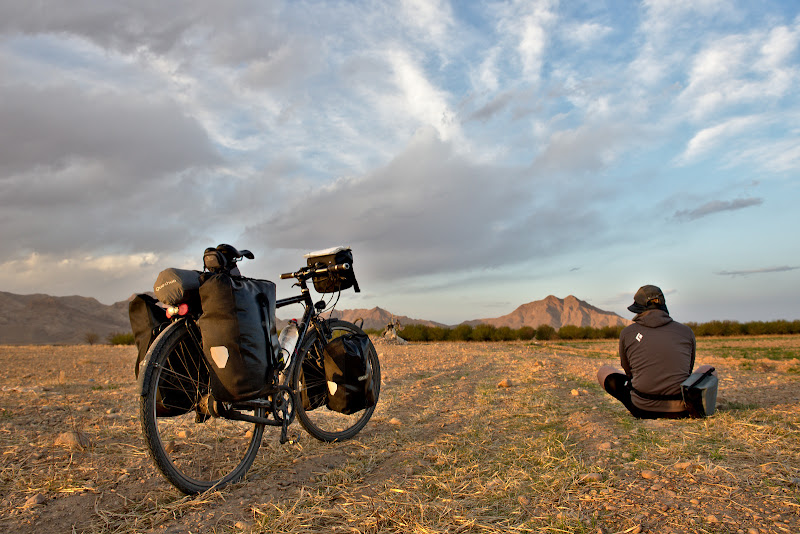 After 230 kilometers through the desert with almost no villages in between. 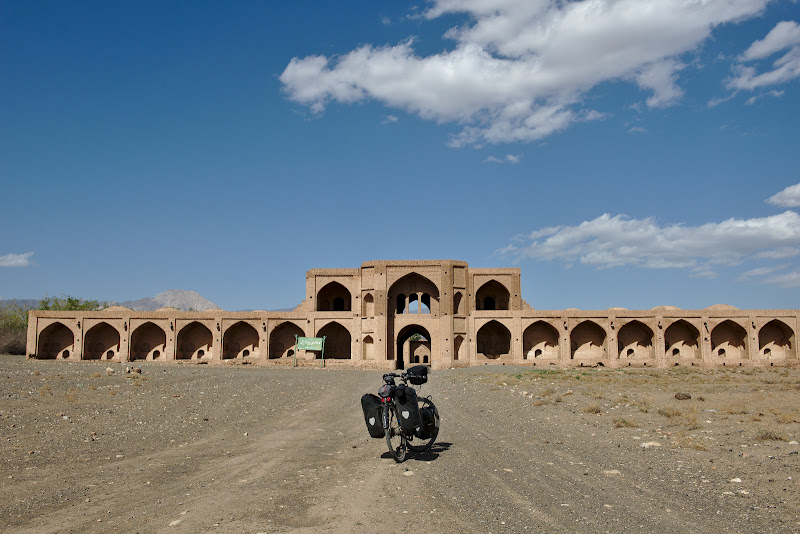 One of the restored caravan-serais. 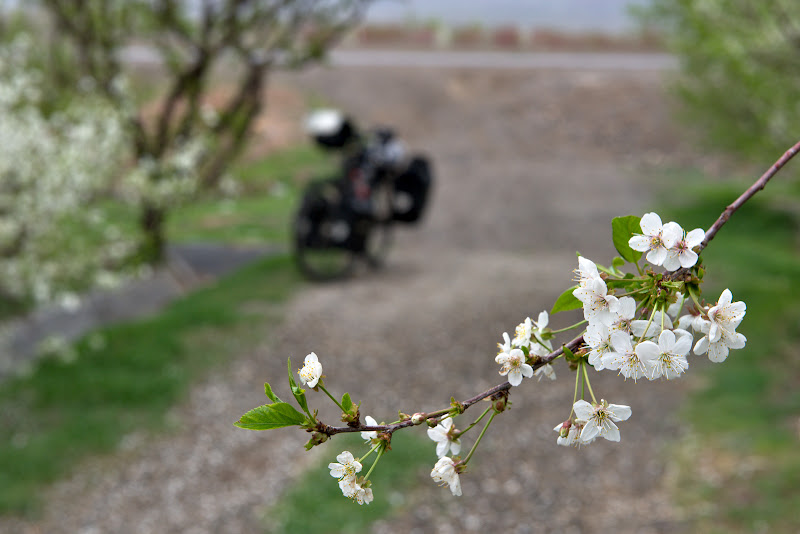 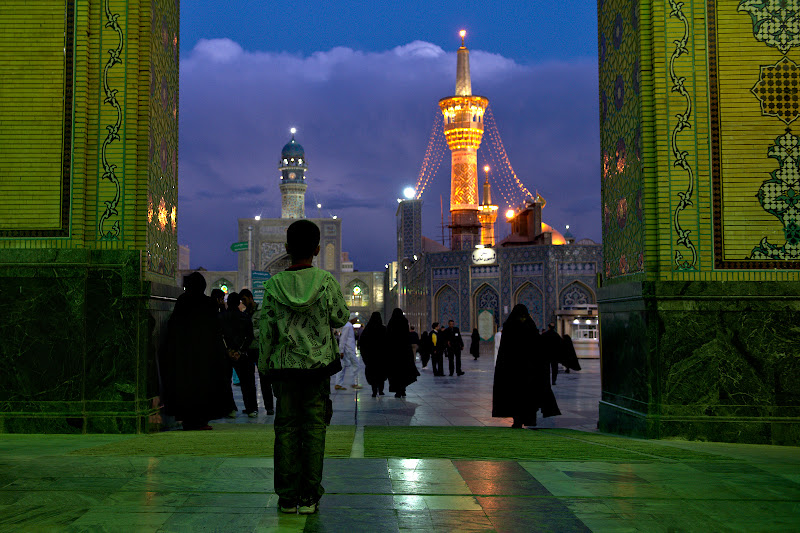 The pilgrimage complex from Mashad. 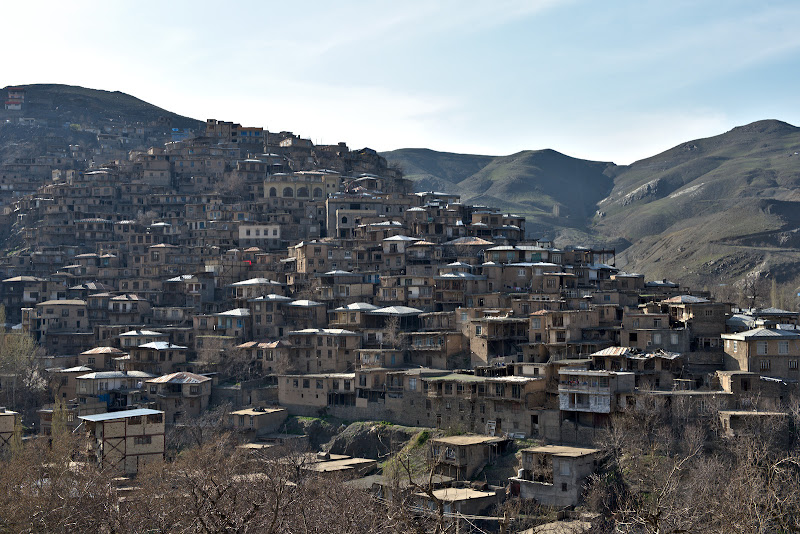 The suspended village of Kang. 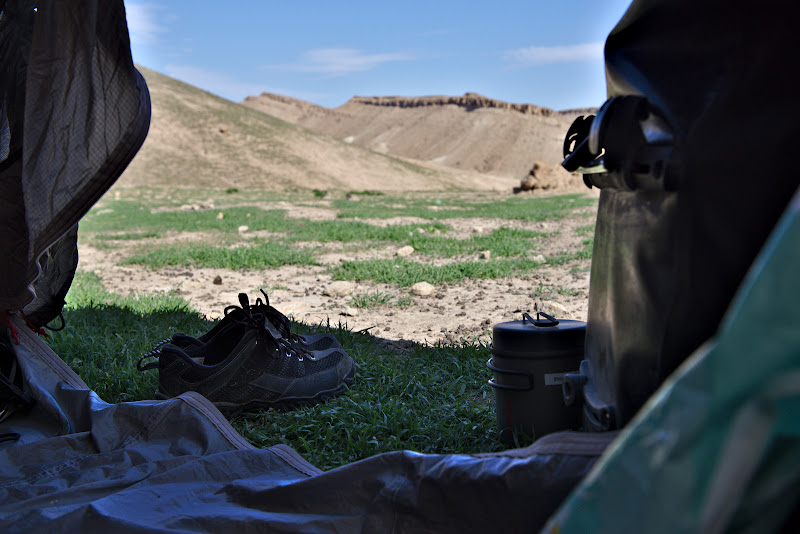 One of the first camping places with grass, in Khorasan before the Turkmenistan border. 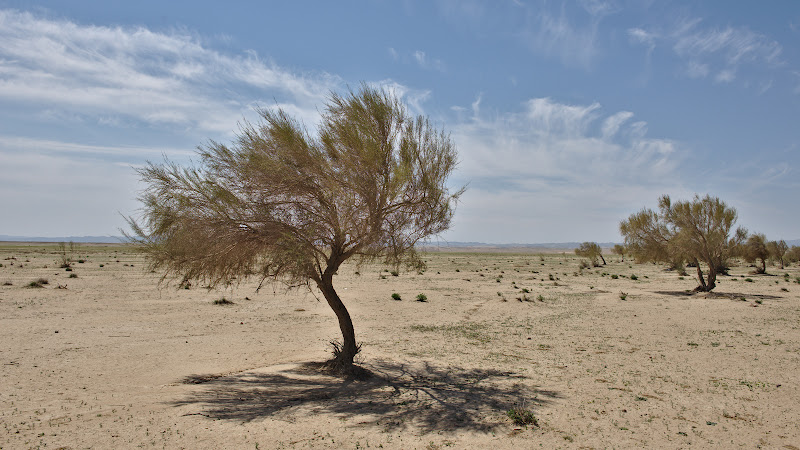 Once again home in the Cozia mountains.

After two days and a half on the road, and after meeting my parents in Slatina we manage to break away for one day for one short tour in the Cozia mountains. If we come to think of it, it has been at least 6 months since we’ve been to real mountains, and our past […]