The Pamir Highway, with it’s lure of the wild and the remote probably has a special place in the mind of any traveller crossing Asia. And even if you know that you’re going to have to endure bad roads, incredibly high passes and endless kilometres of barren terrain you are drawn like a moth to a flame. In few other places I’ve felt so disconnected from the world as on the “roof of the word”, camping at over 4000 meters, hundreds of kilo meters from the nearest place which could be called civilized.

But that’s the subject of a future post and in order to get to Pamir you first have to reach Khorog, the last town before the high plateau of the mountains. As soon as you leave Dushanbe you have to decide between the two possible routes of reaching Khorog, the northern route, with tougher roads and a 3300 meter pass and which is also closed during the winter, and the southern route, longer by 200 kilometers but which is better maintained and which is also used by all the cars.

In my mind it wasn’t hard to chose between the two variants, the only problem being that it was early May and near Dushanbe nobody knew exactly whether the road had been cleared of snow. The police men trying to guide me towards the southern route surely seem pretty sure that it was closed, but after avoiding some and after explaining to others that I had all the needed equipment I was finally heading towards the small village of Saferdoron, pitched up at 2600 meters at the end of a long mountain valley, the last village before the first high pass of my route.

The quality of the roads in Tadjkistan is more or less horrible and the mountains seem to work hard to slowly break down what ever humans try to build in this harsh environment. The Pamir Highway probably was completely covered with tarmac 50 years ago when it was built by the Russians as a road with military significance, but right now most of the part between Dushanbe and Khorog is just an earth / gravel road which sometimes completely disappears at river crossings. All in all it was the kind of terrain where depending on the elevation I was more that satisfied with cycling 60 kilometers a day.

Time, and life seem to flow differently in the villages around Tavildara, and I’m always surprised to see how many children are always in the streets. I honestly can’t imagine a better playground than the large valley surrounded by the snow capped peaks of the mountains. The hospitality is also incredible and when I ask for water in one of the remote houses from the village of Saferdoron I get instantly invited to spend the night with the family, sleeping in closed balcony overlooking the mountains and meeting all the family members. I’m not sure if I was the first cyclist comming this way this year as the road had been just recently opened.

In some ways this is one of the advantages of crossings the Pamir’s in spring as you have the place mostly to yourself, a sharp contrast with the number of cyclist from the summer months. On the other hand you do have to endure lower temperatures and the ocasional snow storm but if you plan the days reasonably it’s generally not an issue.

The 2000 meter descent from the pass down to the Panj River is at the same time spectacular and tough and it takes the better half of a day during which I see absolutely no cars. Fortunately in Kalaikhum I rejoin the main road and I officially enter GBAO, the Gorno Badakhstan Autonomous Oblast, find asfalt once again and relatively well supplied stores.

From here I would follow the Panj river towards Khorog for the next four days, always overlooking Afghanistan which is in some places a stone throw away. Some of the villages, with no road access and perched on the foothills of 5000 meter giants seem to be completely frozen in time, and by comparison the Tadjik side looks ages ahead. One of the surprises which I encounter along the way is a series of serious landslides in one of the nights after a torrential downpour which caused the road to be blocked in several places, completely stopping traffic along the Panj river.

And so after doing some carry bike across the bits affected by landslides I have once again the road entirely to myself, an experience which will repeat itself several times as I head into the Pamirs.

And now for some practical considerations regarding Tadjikistan:

As I’ve said before the road quality in Tadjikistan can be appalling most standards but this also depends on the route choice. The Northern route until Khorog has worse road quality but at the same time is more spectacular. The Southern route is also 200 kilometres longer so the tougher roads do make up a little bit for a shorter distance. That being said you do have from time to time places where you find perfect or almost perfect tarmac but also places where your bike suffers the shocks of corrugated roads.

2. Visas and the president.

I got my visa from Istanbul and in comparison with other places it was relatively straightforward and pretty cheap at 75 dollars for one month. The tricky part is trying to estimate how much time it takes you to get there as the visa has a fixed entry date, and planning such things 2 months ahead can be a bit hazardous. Also one important note is that it’s necessary to get the GBAO permit in order to be allowed in the Pamirs, otherwise you are restricted to the south-eastern part of Tadjikistan.

As almost all the Stans the transition towards democracy didn’t go well but it seems that in Tadjikistan almost everywhere go you a poster of the president isn’t too far away. Whether you see him photoshoped in various situations, ranging from wheat checking to romantic flower fields he soon becomes a familiar face. The personality cult at it’s finest.

Food was one of my biggest concerns in Tadjikistan, and while riding through small villages there aren’t too many things to chose from if you manage to find a shop which si actually open. During summer you might find vegetables and fruit from locals but in Spring the fresh food was completely non-existant. One of the things which I did enjoy and which did fuel quite a few cycling days was the canned condensed milk with bread, which I find tasty even now. At the same time I buy some vitamins in Dushanbe in order to compensate for the lack of fresh food.

If you are lucky enough to find road-side stalls the food is good and cheap, laghman being the dish which I ate the most. The bread is also incredibly good.

4. People and the Russian language.

One thing which I find is impressive about the Tadjik people is that even in the smallest villages people speak a second language, in this case usually Russian. Knowing at least a few words and phrases does get you a long way but don’t worry, if you cycle through the Stan’s and if you are open enough to learning new languages some things will come naturally. You will learn to anwer the basic questions, to ask for directions and to have a really basic conversation.

The people are also incredibly friendly and they did remind me of the hospitality of the iranians sometimes, but at the same time as tourism is increasing in region I really wonder if this will continue or if the perception towards foreigners will change with time.

The Pamirs are breathtaking. Period. 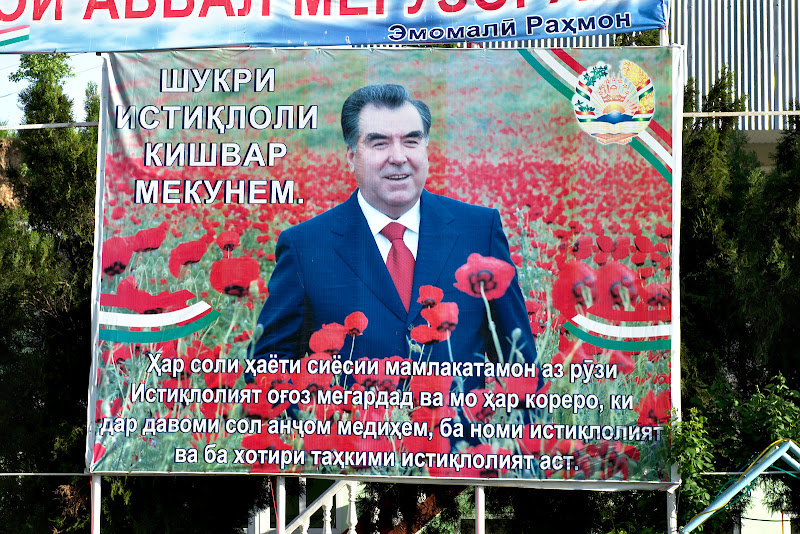 The President, looking as charming as ever. 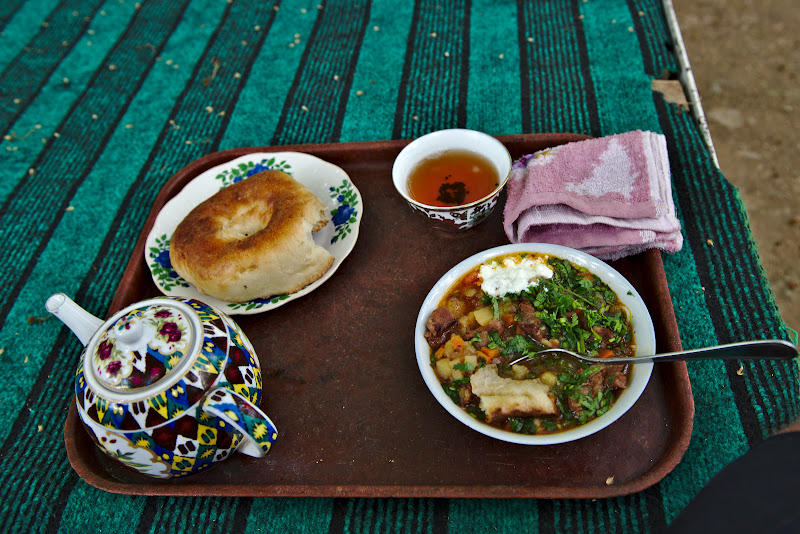 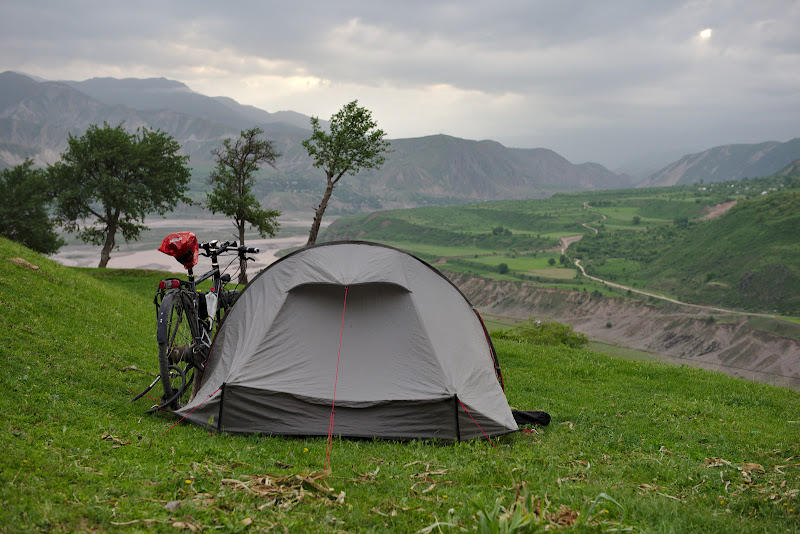 Camping above the road and the river. 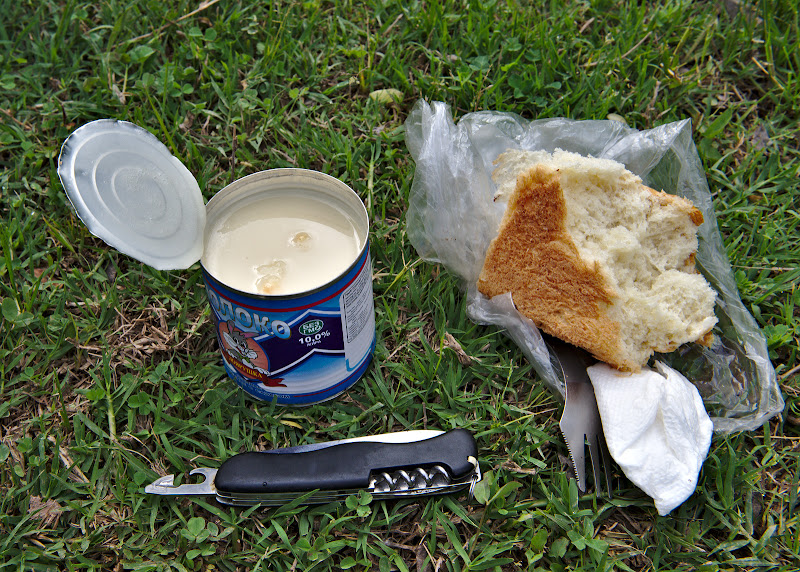 The wonder-food in the Pamirs, condensed milk and bread. One can has 1300 Kcalories, but if you’re not careful the situation can become a bit sticky. 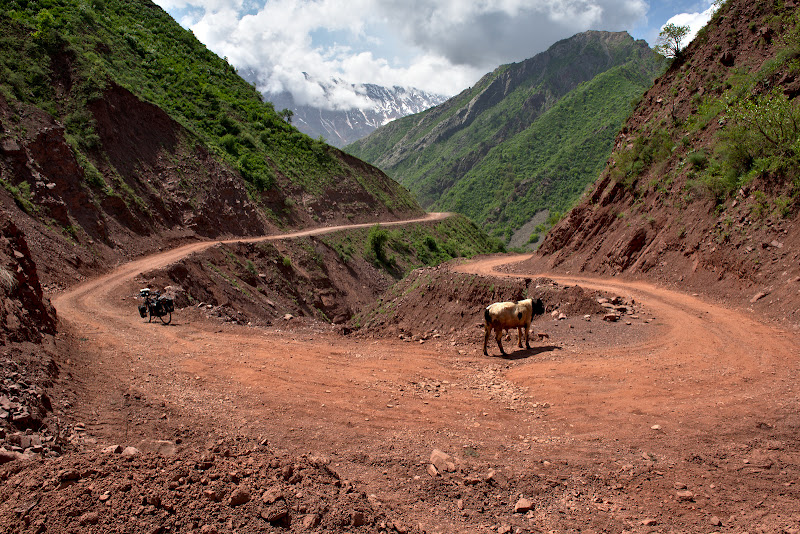 Two loners in the Pamir. 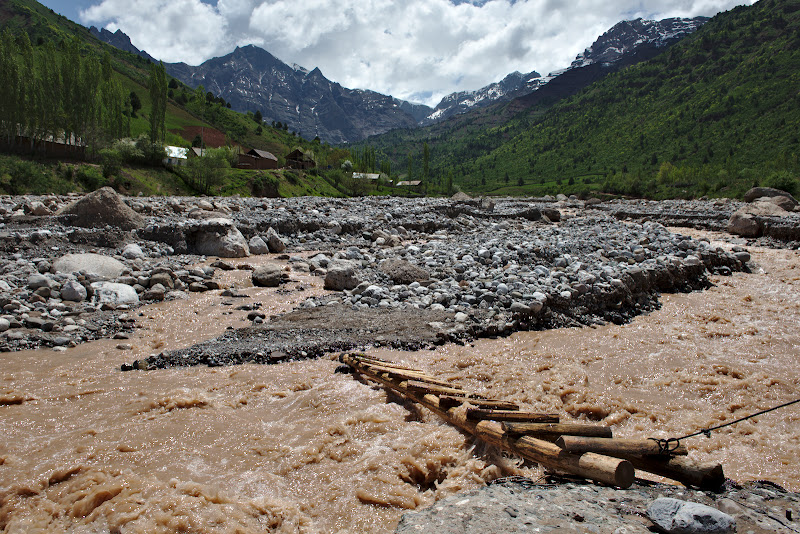 One of the road crossings in spring. 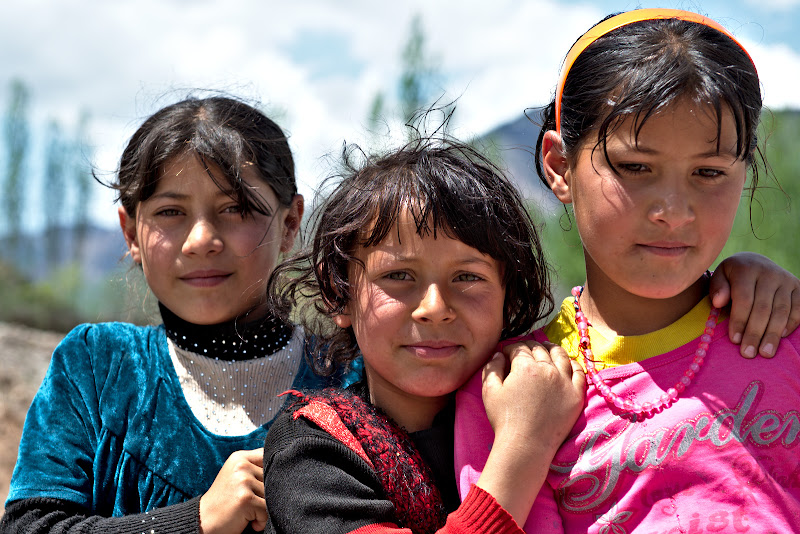 The mountains are their playground. 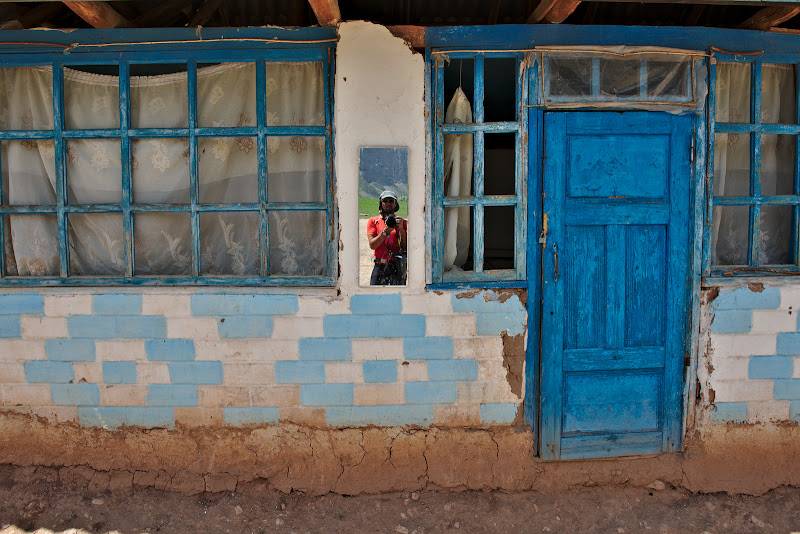 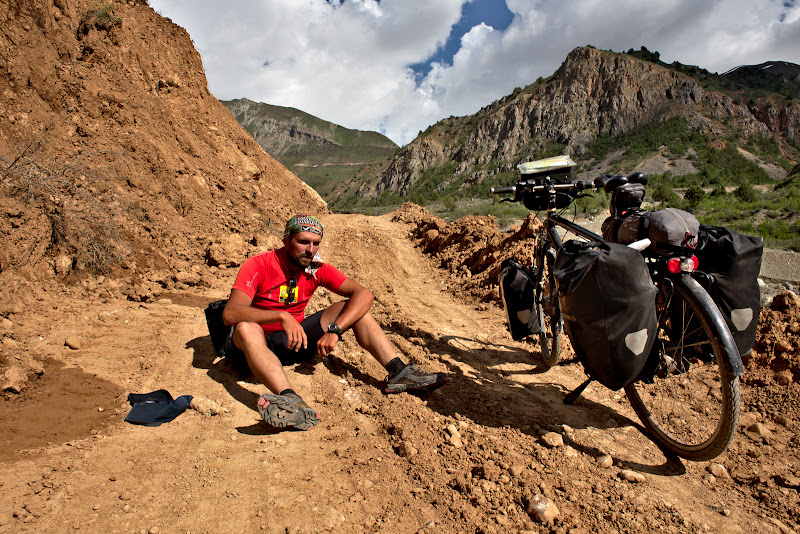 When the going gets though.. 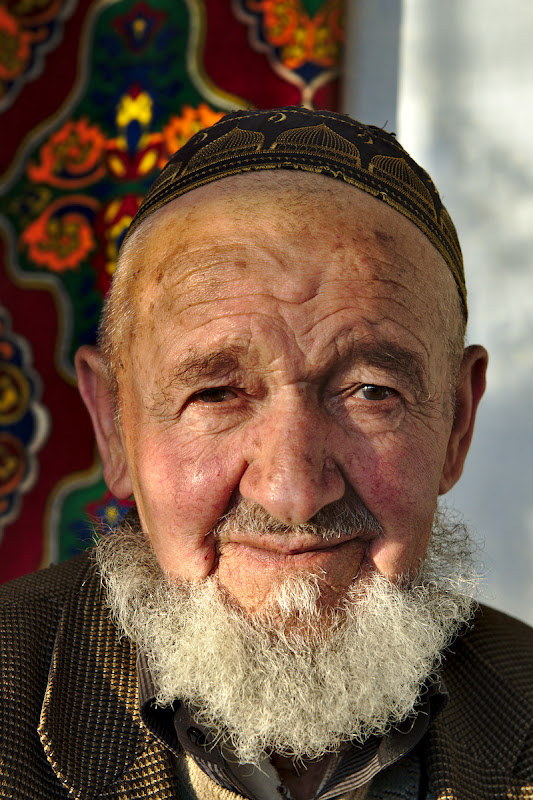 The oldest member of the family. 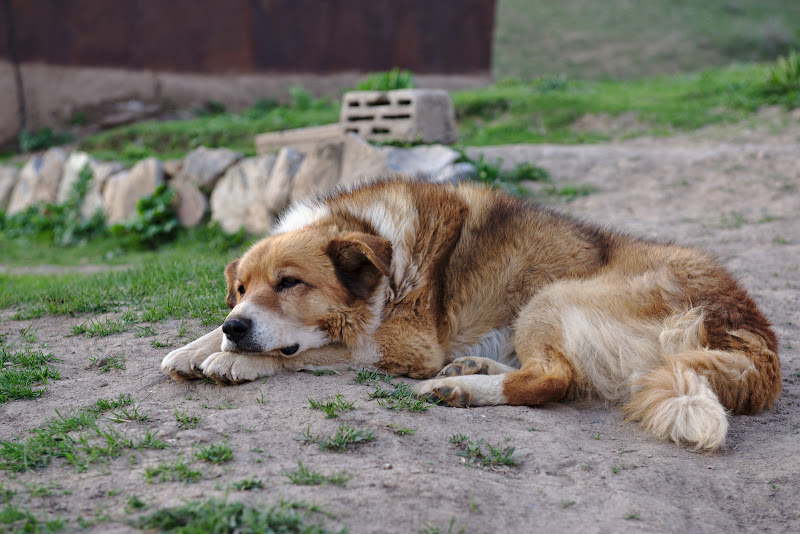 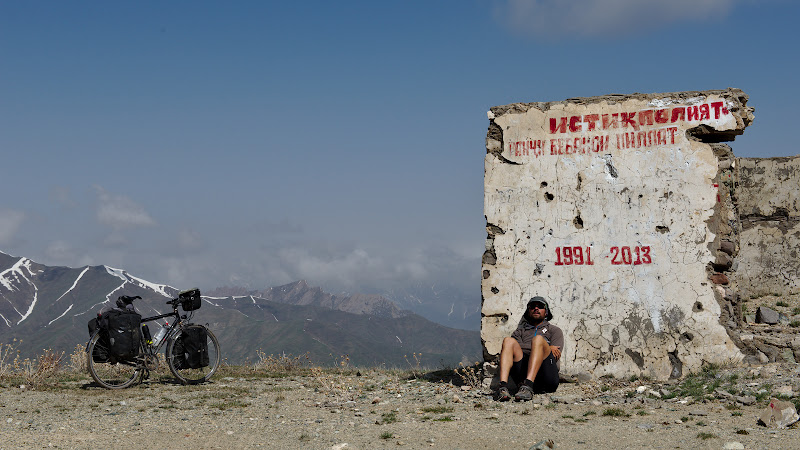 Rest and bullet marks for the long civil war from the region. 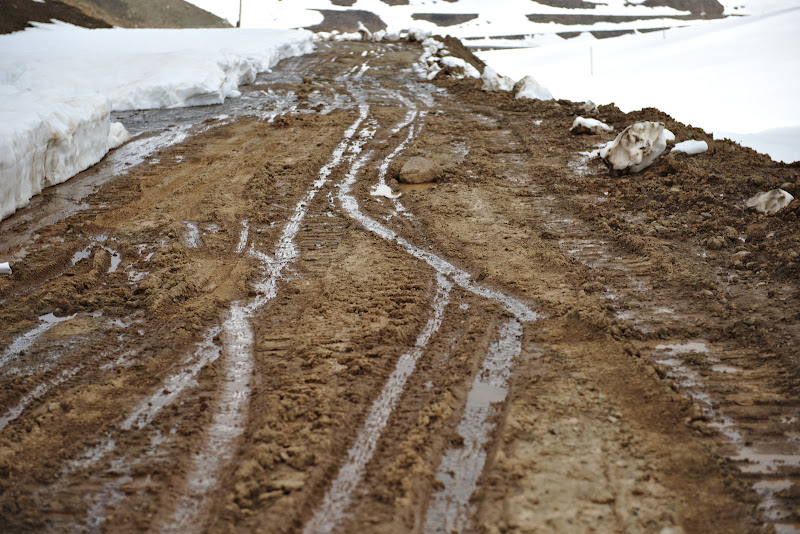 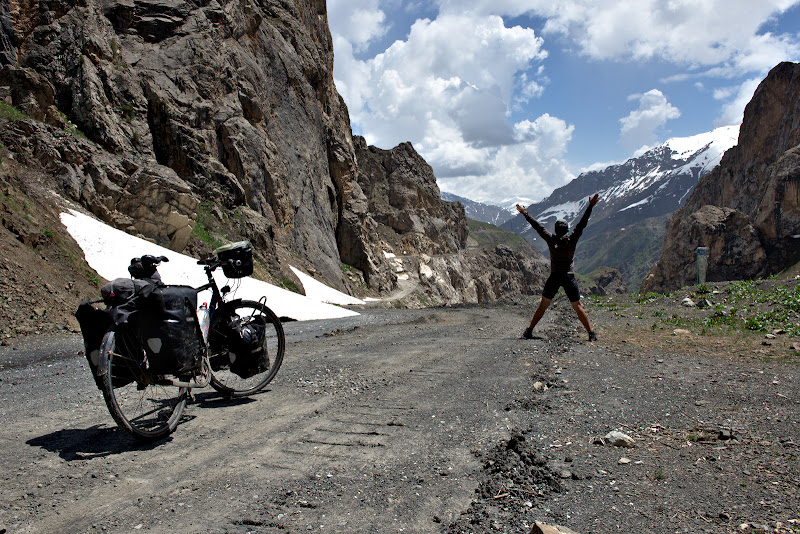 Let there be mountains! 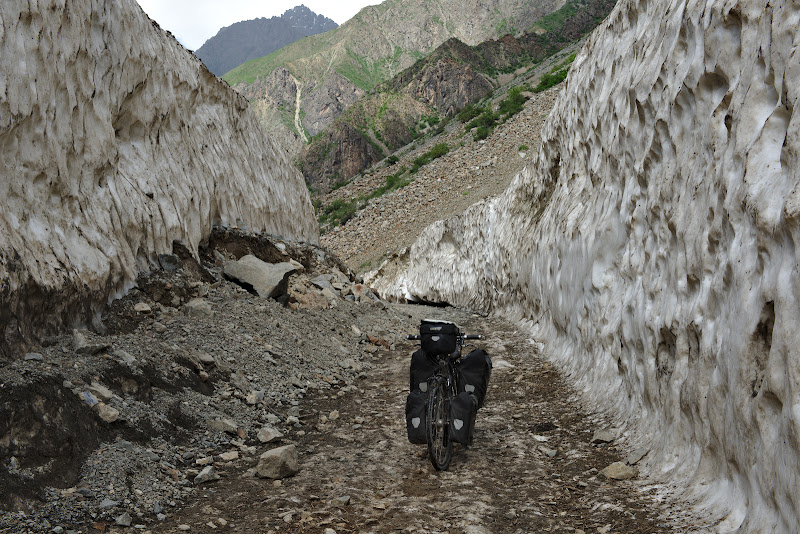 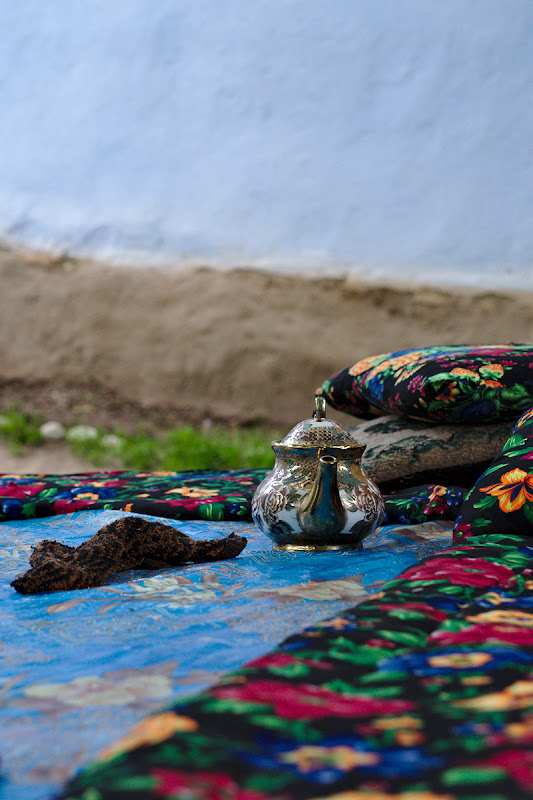 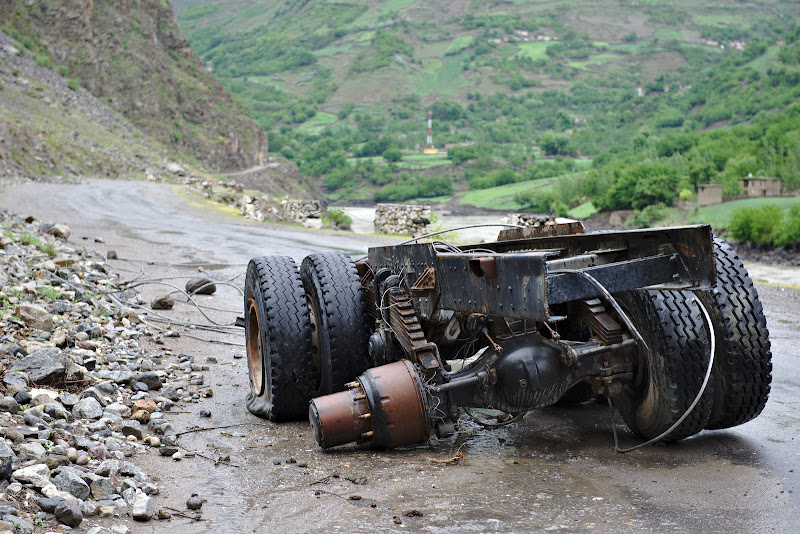 Sacrifices to the road quality. 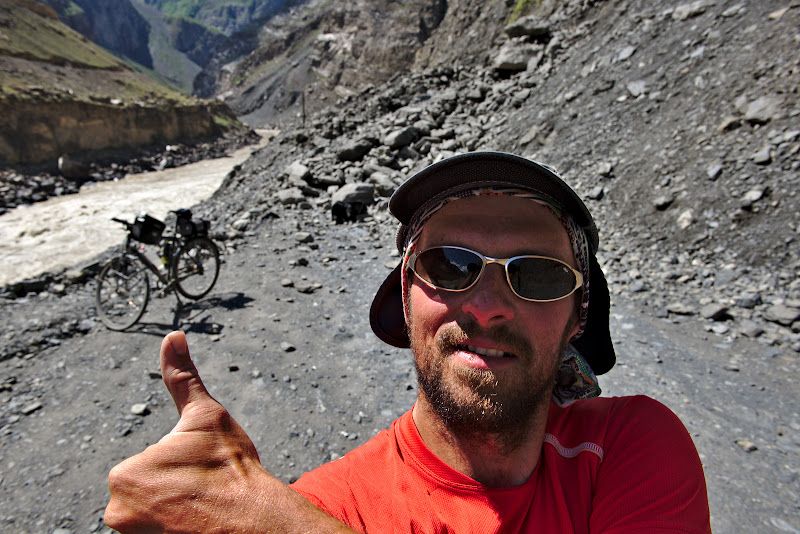 No road, no problem!. 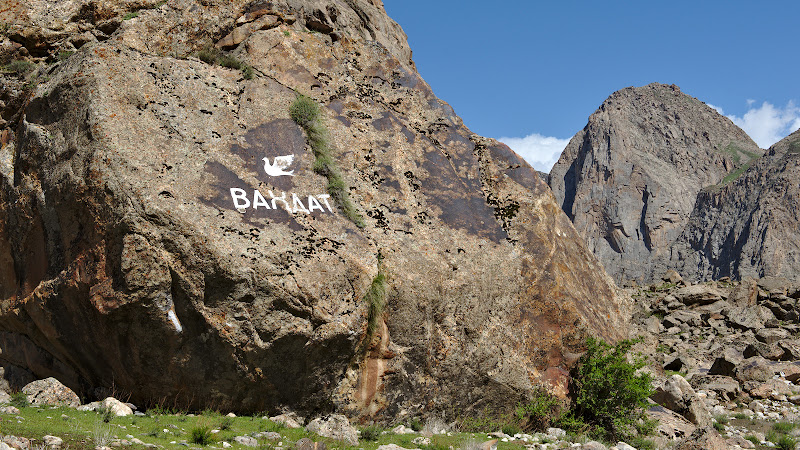 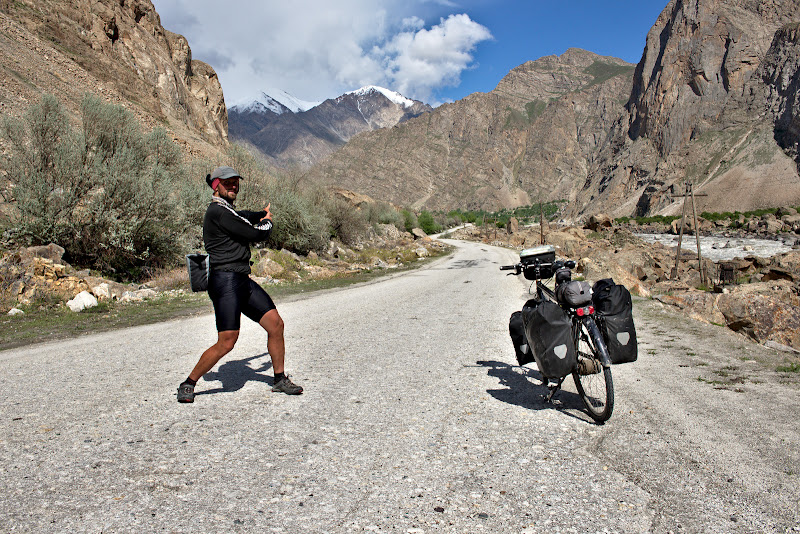 The joy of tarmac.! 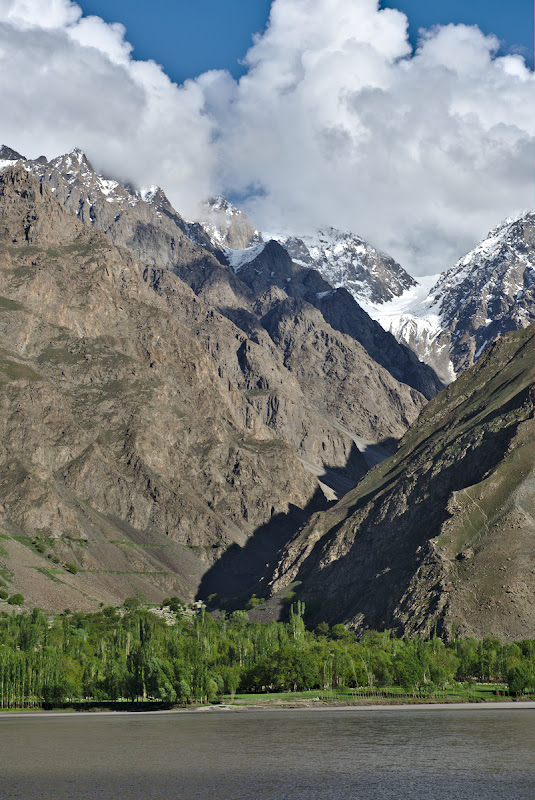 Looking over the Afhan side. 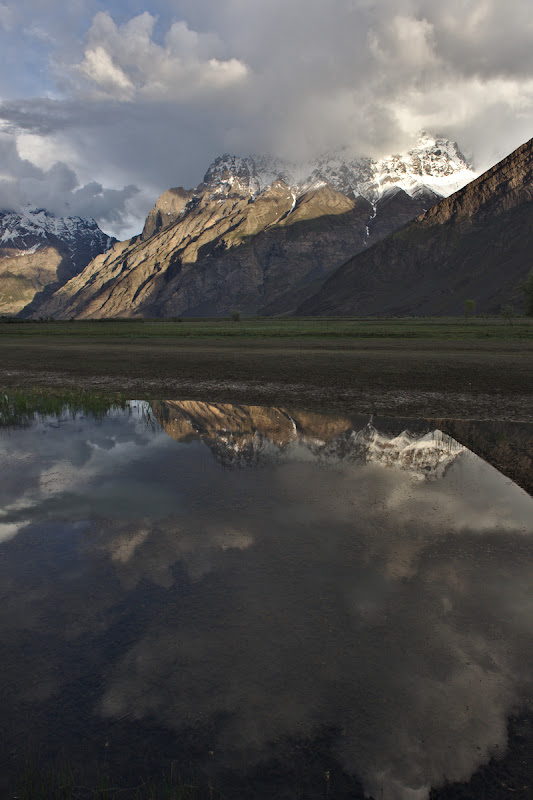 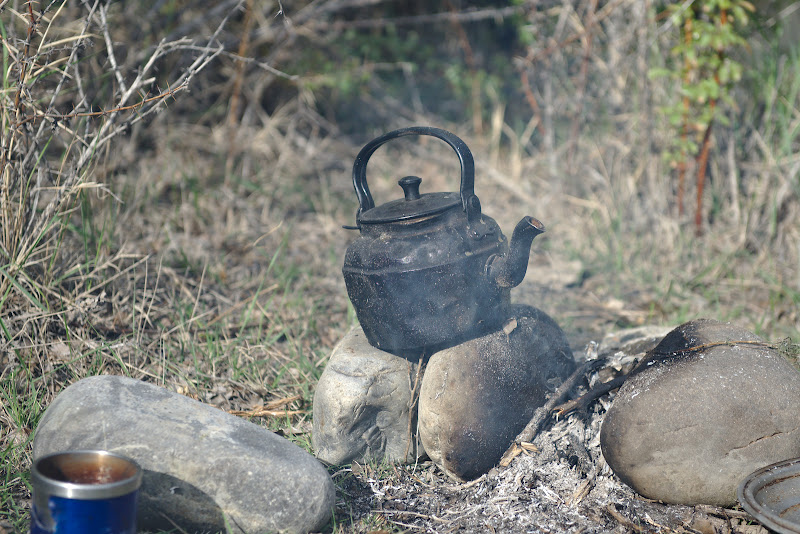 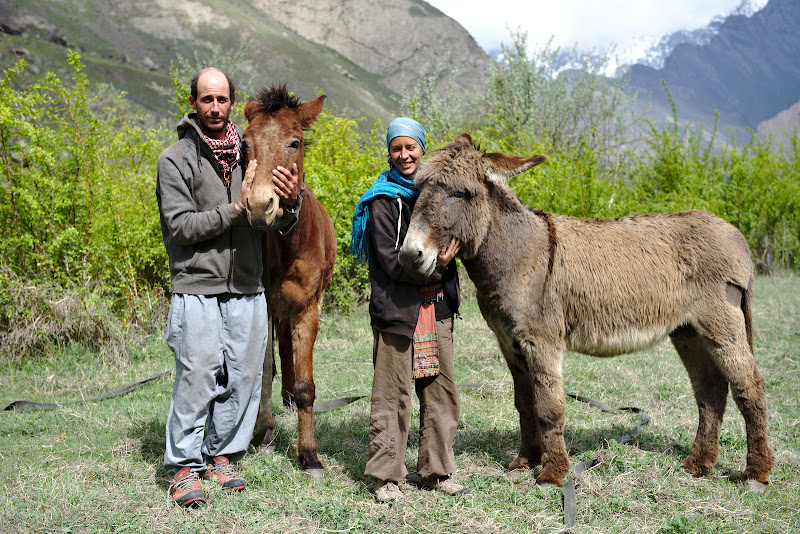 It’s really interesting that there are a lot of smaller mountain chains in Germany which are named after forests. Among them is also the “Thuringian forest”, and after traveling 80 kilometers on the main ridge of the mountain we kind of understood where the name comes from. The mountain chain is almost completely covered by […] Uzbekistan, the sunset over Bukhara, jewel of the east.

A short visit in a city which seems to be frozen in time since the times of Timur.

One thought on “Tadjikistan, Dushanbe to Khorog, the first part of the Pamir Highway”